As a student of Early Childhood Education, I was required to take Children's Literature classes (and to be honest, I loved them!) Among the tales that I enjoyed while studying classic tales was Drakesbill, where Drakesbill goes to see the king, and swallows animals encountered on the trip, who later help him out. All along he repeats, "Quack, Quack, Quack, I want my money back!"
I think I am a modern-day reincarnation of Drakesbill!

And, here's the back story!

Among the objects I collected  from my father's apartment for the estate sale was this ceramic piece that we called "Italian Ducks". These were on the list of my grandfather's possessions at his death in 1990. 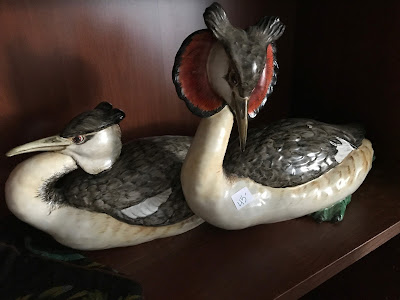 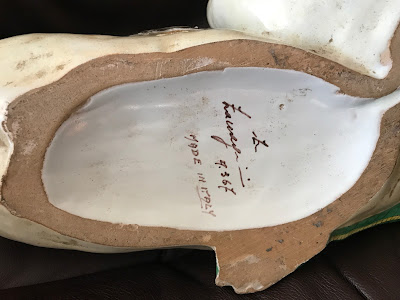 My cousin happened to see the picture on a blog post I put up about the Estate Sale.  She asked about buying the ducks. No problem. She deserves them as much as I do. Later, she was watching Jeopardy and the image for one of the questions was similar to the ceramic piece, and the correct response was, "What are Grebes". So, now we know the name of the weird looking birds.

After things slowed down around here I took the grebes and headed to a local FedEx office. I had all of the packing material needed, but, life was still rather hectic and I'd just as soon have the pros manage the packing of this piece. 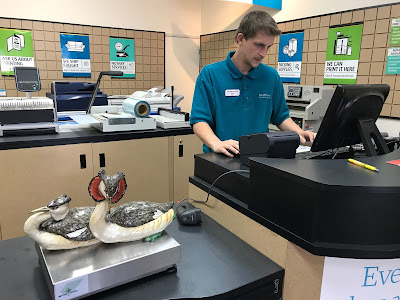 After weighing the pottery it was whisked away and packed. The piece was swaddled in bubblewrap and plunked in a carton surrounded by crumpled paper. I paid the bill, while swallowing hard in disbelief at the cost (in excess of $86!!) But, heck, I didn't have to find a box, find packing material and put it all together. In hindsight, I sure wish I had taken care of things!

My cousin reported that the grebes had arrived, but were broken. What? Yikes! How tragic. The picture my cousin sent makes me want to vomit. What a travesty. 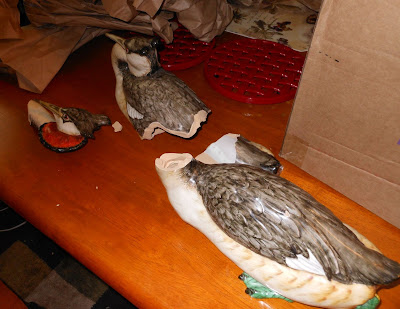 Tomorrow, with receipt in hand.... with pictures in hand... I'll be heading back to the FedEx office...

PS - Cousin has found a restoration company on the east coast and will be sending the grebe pieces to be put back together again. The bill will be handled by FedEx.... or else!