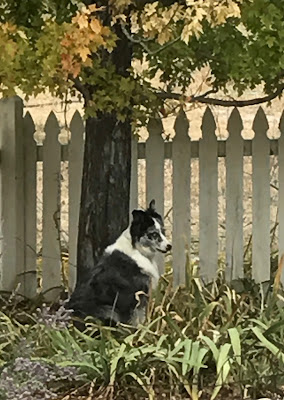 The morning after the sale we had the opportunity to sit and relish our coffee. We didn't have to take the dogs to camp. We didn't have to move things. We didn't have to do a gosh darned thing. I have forgotten what mornings like that could be like. However, after some time that instinctual thing that sometimes happens kicked in. For some reason my mind picked up on the fact that only one dog had wandered by recently.  I called out for Gypsy and heard nothing. I had fed the dogs in the morning, and let them out, but I didn't recall seeing her afterwards. I stepped onto the back porch and called. I neither heard, nor saw, a dog. Then I noticed that the gate to the paddock had been left open. We never leave any gates open. The dogs could get into the paddock and from there, into neighboring pastures, since all of that fencing is simply 4-strand wire. Uh, oh. Gypsy was being a gypsy and had evidently wandered away. Very unusual for her, but perhaps the turmoil surrounding her little world was too much. She does tend to be a bit shy and there have been lots of people in and out and her house has been in upheaval for weeks. Perhaps she crept away for some quiet, or, she has also been known to squeeze through the gate to forage for food. We Dreamers went out into the back and began calling her. (However, since it was a Sunday morning around 6 AM we hesitated to call too loudly!) Regardless, we didn't see any movement of a white-tipped tail in the prairie grass. There was no dog running up to greet us. We came back to the house and continued with our coffee, but to be honest, our minds couldn't settle. We Dreamers had terrible thoughts. There are coyotes around here. What if she wandered upon a kill near their den? Since we did have some rain there is a pool below our barn, and maybe she was stuck in the mud. Maybe she fell into the ravine by our neighbor's barn while chasing a bunny or a deer, and couldn't get out. What if she had gotten caught in stickers. She is "the princess" and if she gets one little sticker in her foot, she won't move. We decided to drive around the streets surrounding us to see if we could find her.

Mr. Dreamy pulled the car around from where it had been parked, down by the barn, out of the way of the sale. We climbed in and headed out to the road.

We were more than a bit discouraged. My heart was pounding. All we could do is return home and wait....
and worry,
and imagine every kind of terrible thing that could happen to a dog,
and worry that she might be in pain,
and wonder what could have happened to her...

Our address and phone number was on her collar. I peered into the few cars that drove by us, looking to see if there was a dog in the back seat. We hadn't gotten a call... but, as Mr. Dreamy pointed out, it was still earlier than 7 AM on a Sunday morning. We'd have to wait.... and worry....

I was already stressed. The taut string around my gut was being pulled just a bit tighter.

After driving the streets closest to our house we returned home. Defeated. Mr. Dreamy pushed the button to open the garage, out trotted Gypsy! Evidently she had followed one of us out into the garage earlier, and we hadn't noticed that she wasn't with us when we came back into the house. We certainly felt a bit foolish having "lost" a dog, and imagined every awful, terrible, no good thing that could have happened to her, only to find that she had wandered into the garage and had been locked out of the house. Yeah, we felt a bit foolish, but a whole lot relieved!!
at July 18, 2017