Last week, as we were helping the Littler Dreamer prepare to move, we had to load up bag and baggage for the trek to Nebraska. When the Littler Dreamer came home from school he stashed his stuff here…. and there. We had (and still have) boxes in the basement. We had furniture in the barn. We had all manner of stuff in his bedroom, and in the living room, and in the kitchen….
We Dreamers all chipped in to fill the U-Haul. As I was walking out of the barn with a piece of son's drafting table under my arm and a shelf or two in my other hand, son, walking beside me, asked me to stop. He bent over to examine the oh, so very cool, very neat spider on the piece of the table that I was carrying. Oh my!
The spider was huge, by Colorado standards. The abdomen was the size of a large, swollen pea.
The spider was shiny. It would rival any well polished gangster car.
The spider had cute dimples on its butt. Four of them that I could see.
Mr. Dreamer sauntered up with his load, and commented, that yeah, he had seen another three or so spiders drop from the piece I was carrying and scurry under my feet. Oh, joyful day.
We discussed the spider, standing there in a cluster, still holding onto our various pieces of furniture.
"Wow!" says Dreaming, "it sure is shiny."
"Neat!" says Mr. Dreamy, "it sure is big!"
"Cool!" says the littler Dreamer, "stand still so I can get a picture." 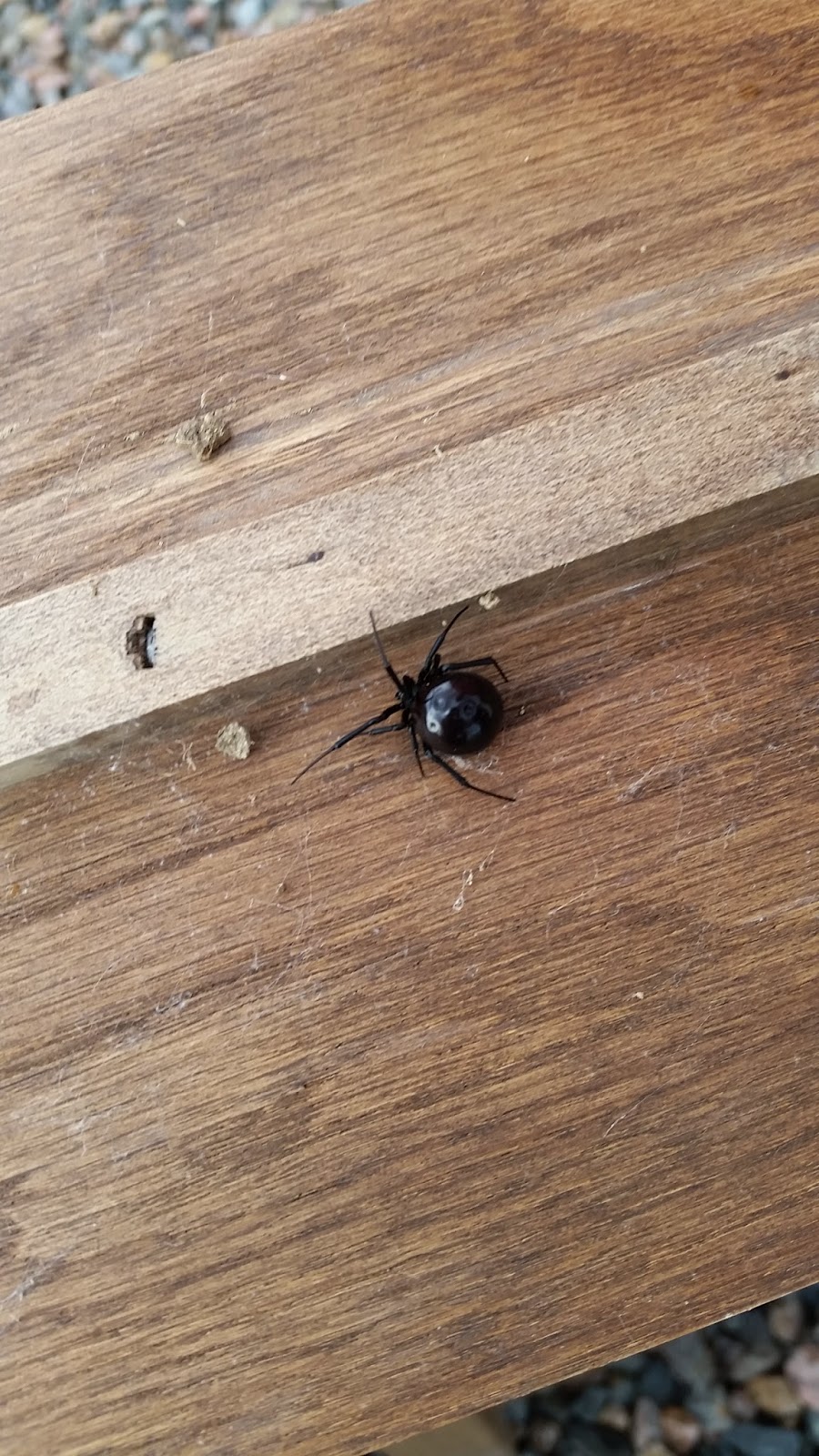 D'ya think it's a Black Widow?" he went on to ask.
"Naw!" says Dreaming, who has seen Black Widows hiding in the corners of the garage at her home in South Carolina. "This spider is far too big to be a Black Widow."
"But," says the littler Dreamer, "let's look to see if it has a red hourglass under the abdomen." And, with the cooperation of Dreaming,  he begins to poke at the spider (with a stick) to try to get it to roll over so we can take a peek. The spider won't comply. She is a modest creature and won't roll over for just anyone! She finally decides to let go of her home, drops to the ground, and quickly disappears in the crevices of the gravel drive.
We went on to finish the packing. But, that doesn't mean that Dreaming stopped thinking about that spider. Dreaming continued to think about that spider. And unlike so many things that she says she is going to look up on the Internet, and then forgets…
she didn't forget to look up "large, shiny, black spiders in Colorado".

Looking at images displayed on Google, Dreaming clicked on the one that was the most similar to the creature on the board. Bingo…

Image from Desert USA
Dimples and all!

Let me introduce you to the western version of the Black Widow spider. From the Desert USA Web site I learned that Black Widows
So that shoots my "it is far too large to be a Black Widow" theory. I am thankful that I didn't inadvertently molest, annoy, poke, assault, or torment the spider. I am thankful that we all could go on about our merry lives.