A few nights ago we pulled the motorhome into Eagles Hot Lake RV Resort. This had not been our original destination, but our intended destination (and its competitor) were booked because of the annual 'round-up'. So, we looked further afield and discovered this campground. I'm glad we did! I love stumbling upon unique places like this. I founded the history of this area is fascinating!

The campground is just down the road from an imposing edifice with a large sign, part of which shines in bright red neon,  identifying the building as Hot Lake Springs.

It all seemed out of place: The building. The sign. The immensity of it all.

I mean… look at where it is: 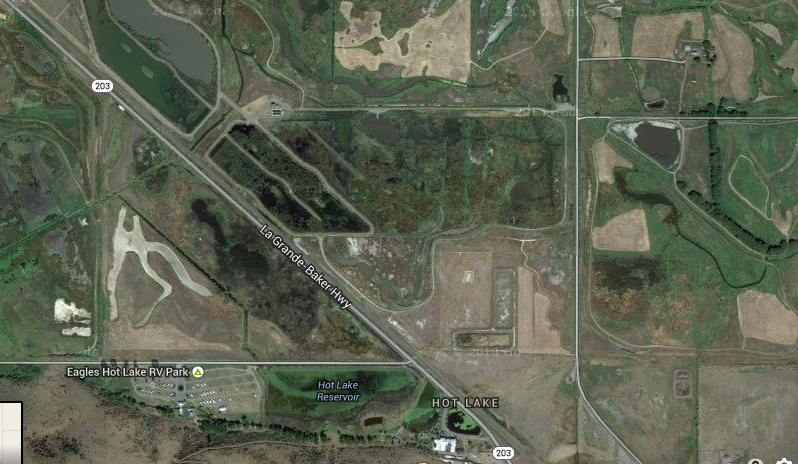 Do you even see it in all the nothingness that surrounds it? The building is the complex of connected white rectangles you can make out in the center along the bottom edge of this satellite shot. Do you think anyone would be confused about just where to go, or which building is the correct one?!!

This piqued my curiosity. I had to learn more. When we checked in at the campground (located in the lower left corner of the satellite photo), we were told that the old building was originally a hotel and a sanatorium. It was popular in the late 1800's and early 1900's because of the healing properties of the hot springs found here. (Hence the 'hot' lake!)

Hot Lake spring feeds the surrounding lakes. The sulfurous water coming out of the source of the spring is almost 200 degrees, and the spring puts out over 2 million gallons of water a day. The water in the lake, and in the canal behind the campground, stays between 70 and 80 degrees. The large structure and the campground buildings are heated with the water.

I wanted to know more, and found a locally published tract called Hot Lake, "The Town Under One Roof" by Shirley Peters & Sheila Smith (© 1997) in the campground office. The authors did a fantastic job of pulling together all sorts of information regarding the area, the springs and the facility.
The Oregon Trail ran through this area, and the land opened up to settlers with the Homestead Act of 1850. However, the valley was isolated and the land was very marshy. (It still seems isolated and marshy!) Once the marshes were drained settlers began to raise crops and run cattle on the land. In 1864 a large, wooden hotel was constructed, with bath houses, to entice travelers to take advantage of the medical benefits of the springs. The county convinced the railroad to route tracks through this area and the tracks were complete by 1882, with a siding by the hotel. (Ah, the lovely sound of railroad trains. A campground is not complete unless it has either an interstate highway or a railroad track going by!) The hotel expanded and became a resort destination for the rich and famous. A large, brick addition was completed in 1906. This was used as a hospital, and the facility became known as the "Mayo Clinic of the West". The original wood hotel burned to the ground in 1934. The brick building that still exists has had numerous owners, and has been used as a resort and a nursing home, under several different owners. It fell into disuse in the 1980's. A few different owners have acquired the property with the intent of renovating the lovely old building. It has been a B & B and most recently, a gallery and museum. However, it is once again up for sale. Care to buy a large brick building with a huge neon sign that is still in the middle of nowhere? It is a bargain at just under $8,000,000.
Click here for the listing for Hot Lake Springs property.

Oh, and the campground? It has a bit of history, too. When the old hospital and surrounding land was purchased in 1985, the new owners created a development plan in an effort to acquire funding. Plans included creating a mushroom and cucumber farm, using the warm waters from the springs. They also considered using the waters for a fishery. They wanted to develop a golf course, a water park and a campground. The only funds acquired were those for the campground, which began construction the following year.