Had a Good Trip?

The Dreamers travelled to the Albuquerque Balloon Fiesta in Cinderella's Coach (more about that later).

A balloon lands just behind the coach

Mr. Dreamy pushed to get us home in time for Dreaming to do laundry, straighten up the house and repack for our trip to San Francisco. Oh, and Mr. Dreamy had some things on his "Honey Do" list, too.

When we pulled into the driveway it was cold and windy. It wasn't a very nice welcome after an almost heavenly week away. While Mr. Dreamy stepped inside the house, to do what we all do when we arrive home after a prolonged drive,  Dreaming decided to get started with the list of tasks associated with arriving at home.

Not my picture... I found it here

Our car is often towed behind Cinderella's Coach, using a system similar to that pictured above. As you can see, there are bars, and wires and pokey-outy things all over the place. First thing we usually do when we arrive home is to disconnect the car. Step one is to take all of the hooks and pins off of the car, so it can be moved away. 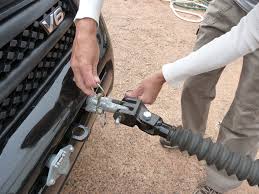 Not my picture... I found it here

On this fateful day, Dreaming had just pulled the last pin, and this time she carefully lowered the bars to the driveway. (She has been known to drop them unexpectedly, and Mr. Dreamy, who often wears his Teva sandals, does not particularly care to have the bar dropped in such close proximity to his toes!) Oh, and yes, by this time Mr. Dreamy was back from the necessary room and was watching the action. The next step is to disconnect the wires and cables from the coach, and then the tow bar contraption can be folded up and tucked away. That is Mr. Dreamy's job. 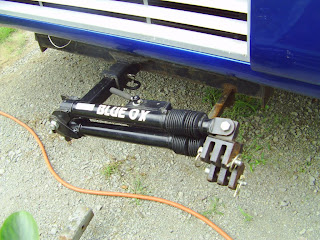 Not my picture... it was found here

To do this Mr. Dreamy stepped over the bear trap tow bars, but.... he caught his toe on something. Since his other leg was also behind the tow bar assembly, he couldn't very well catch himself and recover, and he went down. Hard. I still get creepy feelings when I think about it. I ran around the car and hunkered down to talk to Mr. Dreamy. He was breathing hard (think woman in labor type of panting).
I asked if he was "OK".
He just groaned a bit.

I asked him to "talk to me."
He continued to pant and groaned a bit.

Mr. Dreamy tried to get up, and collapsed back onto the ground.
I told him to stay, ran to get my cell phone and a towel.
I called 9-1-1
Mr. Dreamy took the towel and held it to his face.
He got to his feet, albeit a bit unsteadily,
and by the time I was connected to a paramedic
he asked me who I was calling.
He indicated that he didn't need paramedics.
(Oh, and yea, he said, he didn't need to go to the ER.)
I declined assistance from the paramedics,
put Mr. Dreamy into the car, upon which he was leaning,
and off we went for an adventure in the ER.

This is my picture!

The hospital is exactly 6 miles from our house. As I drove, Mr. Dreamy asked, "What did I do?" I responded that he tripped over the tow bar of the car. He commented, "I don't remember anything." He paused, and then asked, "What did I do?" Our conversation for the entire trip was a replay of that which had gone before. Needless to say, I was a bit concerned.

Three hours later we returned home. The tally of injuries:


It has been a week since Mr. Dreamy's fall. He has been quite a good sport. I played nurse and removed his stitches a few days ago. He will need to follow up on the fracture, and possibly have further studies done of his wrists.

So, our trip to Albuquerque was good.
The trip afterwards, not so great!