Balloon Fiesta - A Blessing in Disguise

On a whim Mr. Dreamy and I called RV tour companies to see if they had space available for the Albuquerque Balloon Fiesta that was coming up, at that point in time, in less than a month. We figured it might be hard to get a reservation to camp at the event, but the tour group would have spaces reserved. We lucked out. The Fantasy Adventure Tours company just had a cancellation and we could join them. On October 3 we left our home for our adventure and oh shucks, we missed the snow that came the next day! (You can tell, I bet, how disappointed I was!)
When we arrived at the camping area I was really bummed out as we followed the golf cart into the RV parking area. We drove further and further away from the balloon launch area, past hundreds, nay, thousands, of RVs. When we were directed to our parking spot we were the last RV in the row, as far as one could get from the activities. Our rig was about 1/2 mile from the road. And this was supposed to be a 'premium' site! Geesh! 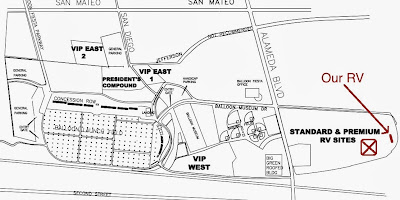 Shortly after our arrival we had the first tour group meeting and began to get to know some of our fellow adventurers. The first thing on the agenda was a demonstration and a talk by a balloon pilot. It was fascinating! Some of the information shared by the pilot included: 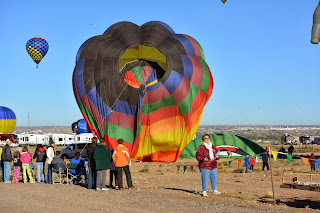 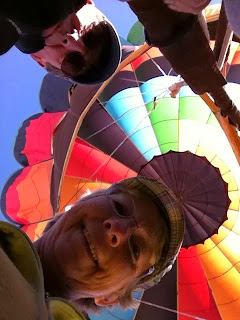 After hearing the pilot's presentation I was beginning to get excited about our coming adventure. But, not nearly as excited as I was the next morning, when I discovered just why we were parked in the south 40. It turns out that the wind patterns take the balloons right over our camping area! This picture shows "Cinderella's Coach" on the left, with balloons heading our way. We enjoyed this scenery seven of the eight mornings we were at the fiesta. (One morning the balloons couldn't launch as it was too windy.) 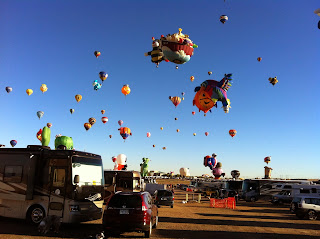 At the end of the row of RV's in the picture above, you might notice an open area. (It is the rectangle marked with an X in the map I included showing where we were parked.) That is a field that was used for targets during competitions, and for landing by many balloons. It was just a hop, skip and jump from our home on wheels. However, there were times when the fickle wind took pilots off their intended course, and they chose to land amongst our RV's! Here, Mr. Wizard's pilot, adroitly put down in a vacated RV parking spot, and used the roadway to take down his balloon. 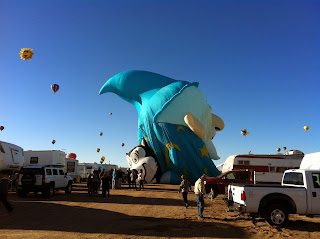 And, here is another, just behind Cinderella's Coach! How's that for a front row seat?!

I'll be writing more about the Fiesta in future posts...