Mornings came early at the RV park during the balloon fiesta. Most mornings we were awakened by either the helicopters, or the buses... or both. Our RV was parked next to the perimeter road and shuttle buses began running from the camping area to the launch field at 4:30 AM. They came by every 10 to 15 minutes. Around the same time we'd become aware of (hard not to) the helicopters that were circling overhead. Three competing news stations had their traffic crews up before dawn to get pictures of the traffic and whatever was happening on the launch field. The plus side to this is that we could watch the action on the field from our TV, and know when balloons were launching.


The "Dawn Patrol" was first to launch each morning. The patrol consists of a dozen balloons that launch around 5:30 AM to test the winds. Looking out the RV window we could see the first balloons rising from the launch field. 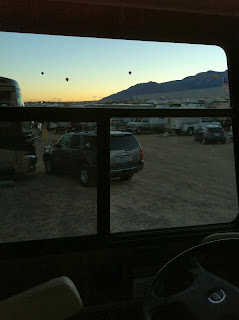 With just a step out the door we could greet the dawn and the Dawn Patrol, with coffee, cameras and dogs in hand. Yes, it was quite a juggling routine and provided comic relief to other early risers in RV land! 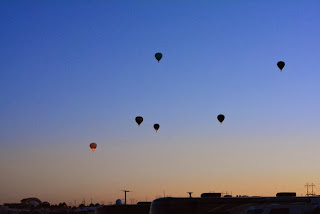 Notice how the balloon glows when the burner is fired. 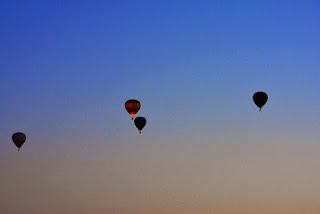 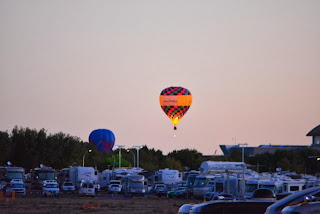