I received a special email today.

Out of the blue.

Gypsy's most recent owner, Larry,  contacted me. Apparently my blog information was sent to him by the wonderful folks in the Wyoming Australian Shepherd Rescue group. Larry wanted to set the record straight on a few things, and gave me the "real deal". It is so wonderful to learn more about our sweet Gypsy's early years. 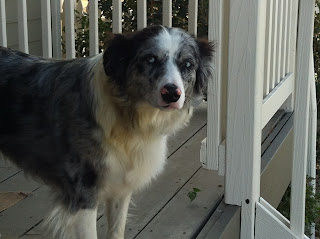 Gypsy was born in the fall of 2008, as far as Larry recalls. She was born on a cattle ranch in Marquand, MO. Her parents were registered Australian Shepherds. Momma Aussie gave birth to Gypsy and her 6 brothers under a large brush pile. Gypsy's original owners didn't, or couldn't move the brush pile. They were able to capture 5 of the pups, but not Gypsy and her brother. So, the two wile pups did not meet the 'off with their tails' appointment at the vet. Because their tails weren't docked, the original owner couldn't sell them. The puppies were given to another cattle rancher, and they had the run of his farm. He wanted to get rid of Gypsy, and Larry took her in. He also has cattle, and at that time he had an Aussie who had been kicked and was having some difficulty doing his job. Larry took in Gypsy hoping she would produce a replacement for his ailing Aussie, or become interested in helping with the cattle. Gypsy did neither. Larry needed a dog to help him with the cattle, and since Gypsy wouldn't do it, and his other dog couldn't (and later had to be put down), Larry acquired a Border Collie pup. Larry didn't originally intend to give Gypsy up, but the pup would not attend to his job, preferring to hang around Gypsy.
We couldn't be happier with our rescue pup... who has no Cinderella story to tell. We shoulda been able to figure that one out - she's just too darn sweet!
at January 18, 2013