We found a special play place for Tucker and Gypsy. The local humane association has a fabulous dog park. We purchased a short term membership, so that Tucker and Gypsy can come play. Gypsy isn't sure about playing, but Tucker goes full bore from the minute we arrive until we take him out when his tongue is dragging on the ground. 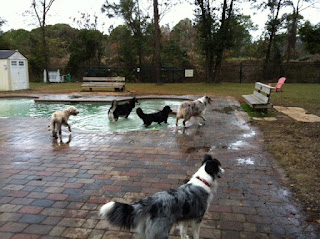 The park has three areas, a big dog area, with at least an acre for the dogs to romp, a small dog area and a training area with some agility equipment. They also have 4 dog bath stations, with warm water. Hmm.... we may just have to test that out before we move on! There are dog balls and dog ball tossers, rope tug toys, chairs and benches for the two-legged folks (although I have seen a Vizsla who preferred to get away from the dog ruckus by climbing up on the chairs) and a pool! The pool is shaped like a dog biscuit. Each of the bulbous ends is about 12" deep, and the center is about 4' deep, allowing swimmers a chance to have some fun. Trust me, neither Tucker nor Gypsy are swimmers. In fact, Tucker made the mistake of following some labs into the shallow area of the pool the first day he was there. He didn't realize it was water until he was in it. He has not gone in since. Some dogs have even figured out that they can escape his enthusiastic play by jumping in the pool! In the picture above, Tucker had just chased the other Tucker, a Portuguese Water Dog, into the pool. The "Other Tucker" jumped out and resumed his play with our Tucker. They are good friends and a good energy match. In fact, all three dogs up near the pool with Tucker, in this picture, enjoy the same type of play. They enjoy chasing each other, trying to herd the dog in the lead one way or the other. Tucker did anger another patron. He had a cute yellow lab youngster and was throwing the ball for his pup. Whenever anyone throws a ball for his dog, and the dog goes flying after the ball, Tucker delights in flying after the dog (the heck with the ball) and tries to redirect the dog's action. The owner didn't care for this activity. He told Tucker, "Stop that!".  Heck, that's as useless as trying to tell him to stop breathing!

Gypsy and Tucker have learned to play their own games together at home. She'll play with Tucker when there are no other dogs around them, but generally just stands near us at the park. She really doesn't know how to be social with the other dogs, and shows a bit of a protective streak when dogs come near us. We still have a few more weeks of play time. Maybe she'll find a special new friend and learn to play.
at January 09, 2013