We lost our second barn kitty last week. It makes me sad because she had started to warm up to me.  She allowed me to pet her and she talked to me when I came into the barn.  She liked to sit on the top of the hay bales to watch me do my barn chores from her high perch.  I lock the cat in the barn at night so I suspect that another hungry Coyote made a daytime hunting run and nabbed her while she was playing hunting.

Prior to our losing the cat a neighbor mentioned that she volunteered for a cat house... I mean a cat sanctuary. I told her that I wanted a barn cat to keep Thing 1 company, so if she ever came across a cat that needed that type of job to let me know. She stopped by last Tuesday, a few days after we lost our kitty. She told me she knew of the perfect cat. Apparently the cat sanctuary is filled to overflowing with cats and kittens. An older guy stopped by a booth for the cat sanctuary on Saturday to ask about what they do. He told them he had a cat he wanted to bring to them, as he had too many cats and this one was hanging around his house, eating all of the food and wouldn't let the others eat. The sanctuary volunteer explained that they could not take any cats at this time and he should check later. On Tuesday he showed up at the facility with the cat in a carrier. OK, so Tuesday is 'later'... I guess! They refused the cat, but when my neighbor found out that I would take it, she said she'd pick the cat up and put it in my tack room (we were in the middle of moving and wouldn't be around). So, Wednesday night when we got home, I got to meet Boots. Well, I guess you could actually say I sorta got to see Boots. Poor Boots was petrified. She was hunkered down behind the feed bins and wouldn't budge. She made ugly faces and noises at me. I left her some canned food. She had already eaten some of the dry food that I have in a 'self feeder'.  The next morning I got to see her from afar, again. But finally, by Friday, she had stopped hissing and growling at me, and Friday night she actually sniffed my finger. Progress! So, yesterday I visited again and low and behold, Miss.... well, uh, Mrs. Boots came up to me as I was holding the cat food, took a few licks, and then let me pet her. Imagine my horror when I ran my hand over her side and felt enlarged mammary glands. This poor cat had kittens someplace, and had been taken away from them. I called my neighbor to see if she knew about it and she indicated that based on what the man had said she suspected that might be the case. I was livid. Yes. I understand that there are too many cats. But, I don't understand knowingly taking a cat from her kittens and leaving them to fend for themselves or starve. That is not humane and that makes me mad as a..... wet hen cat!!
I crated Mrs. Boots and she is now 'living' in one of our stalls at the new barn. She hates me again! She, too,  is mad as a ....
Ah, poor Mrs. Boots. Just wait until I take you to get fixed! Then you will REALLY hate me!

Meet Mrs. Boots... not a very flattering picture, but it was hard to capture her best side. She either has her head buried in the cat food tin or is brushing against my hand for some loving. 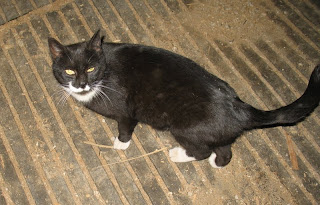