They'll Make a Liar Out of You - Every Time!

Just yesterday I had a conversation with a friend about horses that went something like this:

Friend: We have four strands of wire, except along the back of our property where we only have two. But, the horses respect the fence and I've never had any problem with them going through it.

Me: My guys respect a fence, too. We have one strand of electric along the top of 4 strands, but we have separated our large pasture into 3 smaller pastures using 2 wire braids.

Friend: And they respect that?

Me: You bet! We haven't even had the charger turned on since before May and we've had no problems at all.

So today I look out and what do I see? Doc, happily munching grass in the wrong pasture. When I went to investigate I found that he had walked through the top wire braid, pulling the insulator's nail out of the post and then he stepped nicely over the lower strand to get to grass that he thought was better. You know...the grass is always greener yada, yada, yada. So I shooed him back over the wire. I trotted into the barn to get the screw-in insulators that we had just purchased, not an hour before I discovered my wayward horse! By the time I got back out to the pasture, Doc was once again in the wrong pasture. I shooed him back over and fixed the top wire using the new insulator.

My dear, sweet husband brought down the weed trimmer and cut the grass that would probably have shorted the fence out. While he was working, Doc continued to nibble on the good stuff...on the wrong side of the fence. Oooooh, you wascally wittle horse. Be vewy, vewy careful! 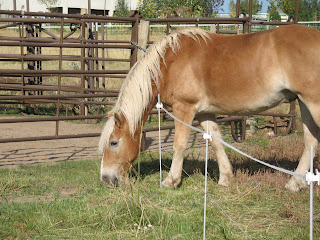 At least my wascally wittle horse seemed to sense that the fence was on. He stayed clear of the fence for the rest of the afternoon. I hate to see them get zapped.
at September 16, 2010