I Toad You So

I hate to admit how much I am enjoying having an 'only' horse. Doc has settled down and only occasionally whinnies to neighboring horses. He gets 100 % of my attention and more importantly than that, 100% of my energy. I have worked with him every day but one in the last week, and that was because I had to be in town most of the day.  Since he still has some issues with being touched (I am convinced that our cart wreck was because he was startled by the whip) and with quick movements, our work begins with desensitization. My poor horse has been assaulted with the carrot stick, the lunging whip, a tarp, a bag with cans and plastic bottles in it, a large ball, a rain coat, a towel, a flag, a WalMart bag, a scarf, the rope....hmmm, have I forgotten anything? Then I make him move.

I had a great lesson on ground work and got some insight into lunging. We worked on a small hill and trotted, round and round. The instructor pointed out how Doc, after a period of time, brought his head down and began to swing his back. He rated his stride and began to work as efficiently as he could. She explained that I should do this at least 3 times a week, and that sometimes it could take a long time to get a horse into that frame. I was amazed that when I took Doc out for the second hill lunging experience, he settled into his trot, head down, back relaxed, within 3 circles. My smart, lazy horse figured out it would be easiest to do what I asked, right away, than to go around, and around and around again to get there!

I've also been asking more of him in the round pen. He is finally responding to 'walk' within a few strides, and will maintain the walk until asked to do something else. Well, OK, so after we've been at it for a while he will try to stop, as if to ask, 'Are we done, yet?' I'm really happy with his walk and trot, so now we will focus a bit more energy on the canter. The energy thing is hard for Doc. He'd rather only do a few strides, thank you!

I can really see that the ground work is helping with our mounted work. I am enjoying riding, even though sometimes we still have the disagreement about what direction we are headed! He is more inclined to settle into a sweet trot or a calm walk when we are out in the field, and if we disagree about where we are going, I ask for some circles, figure 8's or serpentines. When Doc starts to head in a different direction than I intended I have also begun to go through a 'flight check' of my own. Eyes up, looking at intended destination? Check; Weight evenly distributed on seat bones? Check; Hands even with same degree of contact? Check; Feet in proper position in the stirrups and with weight evenly distributed? Check; Body sitting straight in the saddle? Check. Shoulders even? Check.

We've taken some great rides out of the round pen. We've gone out in our pasture, visited a large indoor arena, and we've ridden in the open community area and along the streets in our neighborhood. Doc's walked or trotted calmly past mail boxes, barking dogs, the electrical boxes (which must have some sort of hum that horses can hear) and isn't at all concerned by vehicles passing us on the gravel or paved roads. So, is it any wonder that I was taken totally off guard as we trotted across his pasture the other day? We were ending our ride and were finishing up a nice large circle at the trot, when Doc jumped abruptly to the right. I stayed on, but was a bit perplexed as I had not seen anything to warrant that reaction. No dogs. No predators hiding in the grass. No ground squirrels waving whips or flags. No kittens bounding up out of the grass with claws out and fangs bared. Nothing. Oh, wait....what is that? I circled back to where Doc jumped. Looking down I saw the largest toad I have ever seen in my life. Surely that toad could take a serious chunk out of a horse - at least that's what Doc must have thought. However, I do have to keep in mind that Doc has shown an inclination to be petrified of small mammals - so is it any wonder that this creature, albeit a rather large specimen of his kind, would scare him? I guess he might say, "I toad you so!" 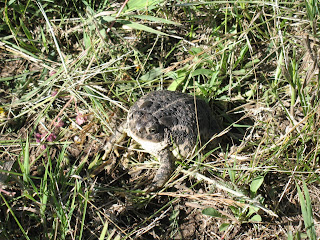