A Horse of a Different Color

Scroll down to the second picture to see my entry for the photo contest. Thanks!


Imagine my surprise when I walked into the barn to feed Doc, and found this beasty in my paddock. It was kinda early and my not-so-awake brain thought that Doc must have leaned against something with oil on it...over and over again. (Do keep in mind that my first view of him was through the bars of the stall while he was standing outside. I hadn't had any coffee, yet!) 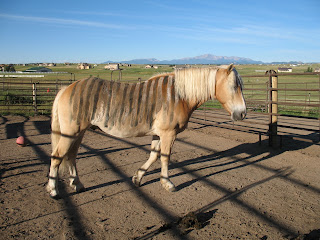 My next thought, well actually, it was more than a thought... I said, to no one in particular, not realizing that there was someone in particular, that I had to go get my camera! After all, this is great blog fodder! 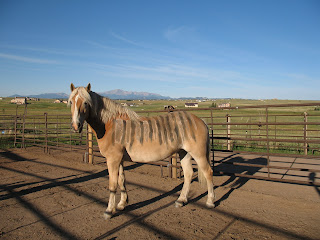 Whereupon my son and one of his friends, who were taking the show in from the hay loft commented, "It's a Z-Bra!" 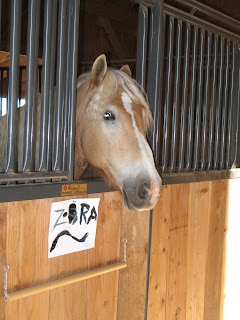 It seems that my son never did get around to pulling an April Fool's prank on me. What the heck, August is close enough! They both start with A! He went on some horse sites to find out what he could use and then ordered some horse-safe, non-toxic paints. He and his friend left around 4:30 in the morning to get here in time to decorate the horse. He was really sad that Pippin wasn't here as well. He had thought to make Pippin into an elephant! He was also sad that Doc decided to roll while the paint was still wet. I think it made the paint job look all the more realistic! 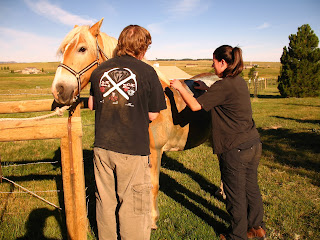 I think I frightened my husband a bit when I went up to the house to tell him that Doc didn't look right. He asked what was wrong. I said that I didn't know, but that Doc just seemed off-color, and for him to please come and have a look at him. He enjoyed the prank, too. Unfortunately we had an appointment to get to so we couldn't take Doc around to show him to friends and neighbors. I also didn't think it was fair to put him out in the pasture in his 'costume'. Who knows what the neighbor horses might say to him! So, the kids young adults washed him. 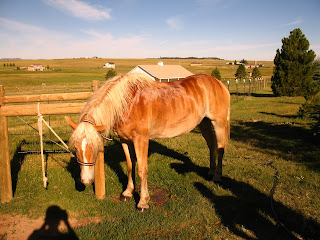 Oh, no!! The stripes still show! Will he ever look right again?!