Doc's Diatribe: Once IS Enough!

My Mrs. Owner came out bright and early this morning, like she has every morning this week. She put on the lumpy halter, played with my hair and put on the saddle and bridle. But, instead of going into the pen to go around and around she took me to the end of my pasture. There was a huge machine on the other side of the fence. It sounded like thunder. It was cutting the tall, tall grass. Darn, that means I won't have an easy time of snacking when we go riding there. I kept looking at the thunder machine to make sure it wasn't going to come too close. Mrs. Owner kept tapping me with the string thing. It was really hard to watch her and watch the machine. My ears had a hard time swiveling between the noisy machine and noisy Mrs. Owner. After she tickled me with the string thing she climbed on and we did some walking and trotting. My Mrs. Owner kept asking me to go this way,  then that way, then this way....why can't she make up her mind? I kept trying to show her what way we ought to go, but she would never agree with me. Finally she climbed off. After taking off the saddle and bridle she actually let me go out into my pasture to eat. Yum.

Later, after the sun was as high as it would go, my Mrs. Owner showed up in pasture with some horse cookies. It used to be that I didn't like to eat things from my Mrs. Owner's hand, but I have acquired a taste for cookies. I leaned forward to get one and she caught me. She put the bumpy halter on me again. Uh oh. That halter means work. Is she having problems with her memory? We already worked today. Surely there must be some sort of mistake. But, no. Before I knew it, my Mrs. Owner was on my back and we were heading out to the common property where the thunder machine has been grazing and has cut down all of the grass. Then we turned and headed to my Mrs. Owner's friend's working place in a building. I had a chance to visit with Cheyenne, and later with Sweets and Sundance. We walked and trotted and climbed over the box. The wind began to blow and it thundered and rained but we all stayed dry. I got to 'run' the barrels. We trotted in tight circles around the blue barrels. Don't tell my Mrs. Owner, but I liked doing this. But, even though I liked the barrels I did not like having to put up with my Mrs. Owner on my back twice in one day. I was a bit grumpy about it. In fact, when my Mrs. Owner's friend wanted to take a picture I wouldn't look at her. My Mrs. Owner had to push my ears up to make me look interested cute. 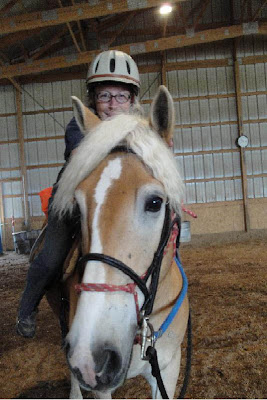 Email ThisBlogThis!Share to TwitterShare to FacebookShare to Pinterest
Labels: Doc