... apologies to all of my friends who live in Texas, but honestly....

If it weren't for Texas... we'd almost be there by now! (Hmmm, if we lived in Texas, we would be home by now!)

We don't like to drive more than 400 or so miles a day... usually a bit less. So, Texas takes at least 3 days. On the western side of the state, along I-10, we also have to be careful about sites for camping, oh, and gas stations. There are a lot of miles with only a sparse number of campgrounds that we would choose to stay at and fuel stations sometimes are few and far between.
The trek through Texas is long, and I'd like to say it's boring, but there is a lot of diversity in those 881.5 miles: green and lush, and flat, on the eastern side, arid and dry, with hills and lots of rock and arid mountains on the western end. Amazing wild flowers in the median of the Interstate in the spring. Large cities: Houston and San Antonio on I-10 and Dallas/Fort Worth on I-20, each with too much traffic, a lot of road construction, and sudden lane changes that are challenging in a car, and terrifying in a motorhome or towing a trailer. And... the traffic is always an issue, no matter the time of day or the direction one is traveling!
Recently it was announced that MAD magazine would no longer publish new material. The magazine  is/was almost as old as I am. But, one of the most intriguing features in the magazine, one that I loved as a kid, was the fold in found on the inside back cover of the magazine. 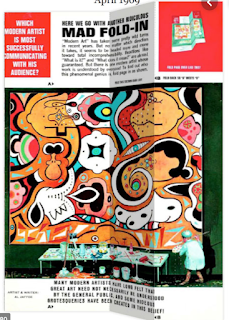 I am so wishing that we could create a new map, and "fold in" Texas, allowing us to travel from Louisiana directly to New Mexico!