Along the Way: Kingsley Plantation

On occasion, while we made previous trips back and forth between Southern Florida and Amelia Island to visit family, we would go the "back way" following A1A south. Every time we take that road we pass signs for Kingsley Plantation. We always comment that we should stop there some day. Some day came recently! We were on our way north and were actually a few hours early for camping at Ft. Clinch State Park, so we turned into Ft. George Rd. The road was narrow and we were thrilled that we were in the tin can (the Silver Bubble... the Airstream) and not in Big Red. At the fork we turned left onto Palmetto Ave. This is basically a single lane, rutted dirt road. We were even happier that we were in the Tin Can, except we were not sure we made the right decision to follow this narrow, canopied road, but there was no going back. 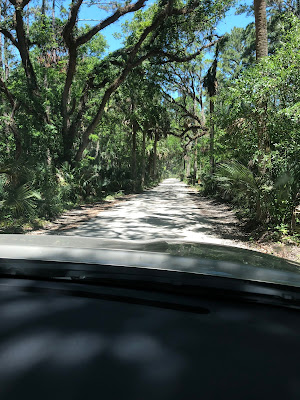 We seemed to just fit on the road and there was no way to back up and no way to turn around. After what seemed like ages (with one stop so I could run back and secure the Keurig, which was destined for the floor) we arrived in a lovely glade of trees in the center of the Plantation property. That dirt road had shaken us back to the late 1700's. 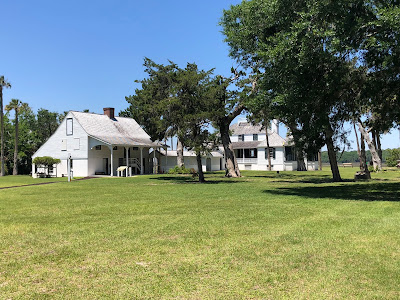 The entrance road was not especially suited for a trailer and truck, and neither was the parking lot. Scott quickly assessed the situation and deftly backed into a service road in the shade of some oak trees. We took a few minutes to enjoy a  sandwich and soda, sitting under the trees with the dogs, and went off to explore the park. 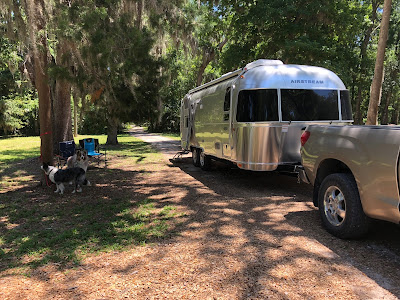 We couldn't go in the Plantation house but it's architecture was very interesting. The house is undergoing renovations and has limited tour opportunities. It is situated on the banks of the Ft. George River. There was a delightful breeze that was welcome on this sunny day. 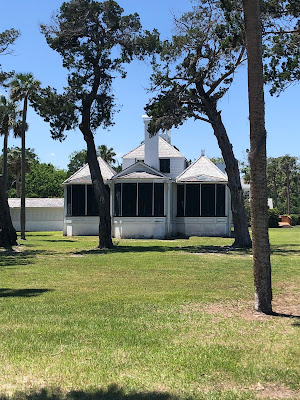 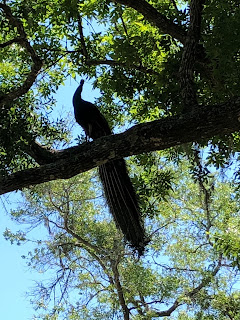 The Plantation had 32 tabby cabins that housed close to 100 slaves that worked at different tasks on the 1000 acre Plantation.


During the 1800's the land was used primarily to grow Sea Island cotton. One of the slave tasks was picking the seeds out of the cotton. The traditional cotton gin could not be used since the fibers of this cotton were so long. One  display had a picture of several women sitting in, and surrounded by, a huge expanse of fluffy cotton as they set about their task. There were some great exhibits with pictures from the Plantation. 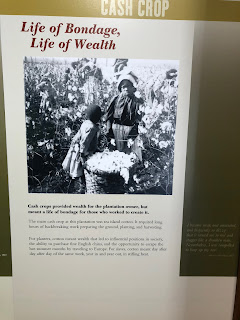 There was an interesting display about the slave/owner relationship. Certainly, many owners or overseers meted out harsh punishment, but Kingsley freed many of his slaves, and even married one of his slaves.  When Florida was acquired from Spain in 1821, harsh political, economic and social reforms came in with the new Government. Kingsley worked hard to bring about change and create a three class system that would accept freed blacks in a position below that of whites but above slaves. He met with frustration and moved his family and some of his slaves to Haiti in 1837.
at May 02, 2018