We stopped for a few days to visit with family on Fernandina Beach. Mr. Dreamy's mother (soon to be 96) and his sister and her husband live on the island. We often try to get a spot at Ft. Clinch State Park as it is relatively close to them. This year I was lucky. I checked for reservations around the time we had planned to head back. Evidently someone had just cancelled their reservation as there was an entire week available. I took three of the days and we enjoyed our stay. 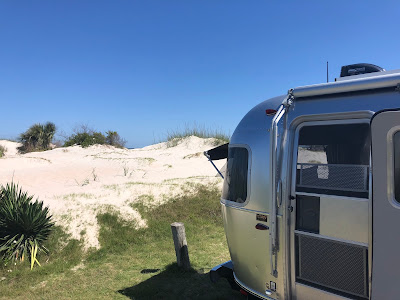 We managed to go out to a few nice restaurants with Don and Sue. Don took me to play ping pong with his friends. I was lucky to get 4 points per game, on average! Sue treated me to aerial yoga. What a blast! My nagging hip seemed to respond to hanging upside down! I'll have to look for places in California! 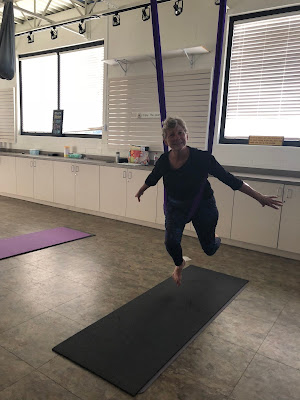 I am pretending I'm Mary Martin and playing the part of Peter Pan. I'm swinging back and forth, although my legs have sunk to half mast at this point and it doesn't look like I'm doing anything. This picture was taken after the yoga class and I was tired! 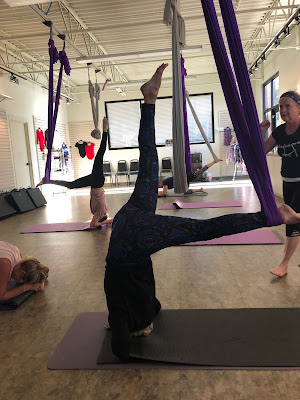 I was surprised at how well the silks kept me balanced.

We visited with Betty, Scott's mother. We saw her several times while we were on the island. She is living in an assisted living facility and has her good days and those that aren't so great. This day we visited after lunch and she was groggy from meds they give her after meals. She began to perk up after we were there for a while. Betty picked up a hat and had fun showing it off. 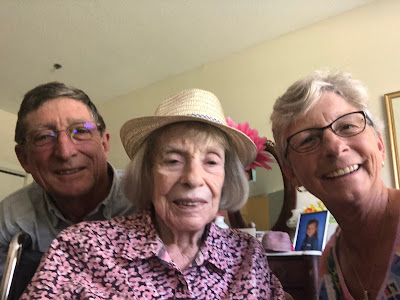 In this picture Scott was showing her a picture of her great-grandson. When Scott went to move the iPad and go to another picture she exclaimed, "No! Let me kiss that darling baby!" 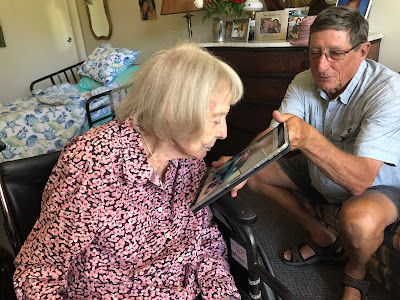 Betty was tired and we gave her hugs and kisses as we left. Each time we visit and prepare to leave I realize that might be the last time I see her and I get a little teary eyed. But, each time I've returned she's been there for me. She's my favorite mother-in-law (a little joke there!) and I've loved her like a mom since I first met her.

The next morning we hitched up and began our trek to the west.