We had a bit of a misadventure, which meant we missed an adventure. We stopped in Van Horn, TX for the night.

Shortly after dinner we chatted with a fellow from a motorhome parked nearby and he mentioned that he was going to Carlsbad Caverns the next day. We looked at each other, and nodded... yes, we would do the same thing. Every time we drive through that area one of us mentions that we would like to go there some day. One of the reasons we bought the camper was to have the opportunity to poke around. Fast forward a few hours....

I return from walking the dogs and the Mister is outside with two guys at the power center for the camper. It turns out we have no power. None! No A/C... no TV... oh, and in the morning... no coffee! But, I am getting ahead of myself.

Our camper has a built-in surge protector. For whatever reason it decided that it didn't like the power the campground was providing, and it shut down. It would come on for a minute or two... then shut down. We finally gave up and opened the windows. Luckily, we were in the high desert and the cool night with a nice breeze was coming upon us.

We slept fitfully, and the next morning decided that even if we did move to another site and had power, neither of us could trust that power and could not be comfortable leaving the dogs inside in temperatures close to 100 degrees. 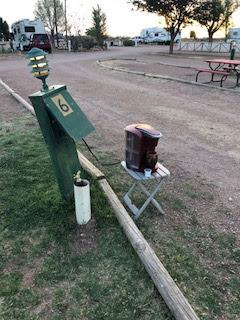 So, we broke camp early  (taking the Keurig out to another camp site where they did have power so we could have coffee) and made the 430 mile trip to Lazy Days RV in Tucson, a certified Airstream dealer. We figured if we arrived at the campground and didn't have power, they might fit us in their service queue as an emergency case.

We each held our breath when we flipped on the 50 amp circuit. We peeked inside at the microwave...  the LED lights that show the time being a good indicator of the status of our power. Nothing. Oh... no! Then, there was a muffled thump of something being tripped, the microwave lit up, and later the AC came on (a good thing as it was 97 outside!) All seems to be in order.

I am sad that we missed going to the caverns. Maybe next time! We will stop at that campground again. They bent over backwards to help us. The campground was exceptionally neat and was better than the one where we previously would stay when we were in that area. They were so upset that they gave us our money back.
at May 09, 2018