I got to go in the truck. I likes goin inna truck. The man guy made a special  thing he called a platform so's me and Tucker have a smooth flat place to lie down behind his seat. I gist call it wood onna count it smells like wood. If I stands really tall I can see where we is being going down the road. It isn't hardly soft enough for a doggie princess like me. I am so spritely I can jump right up onto it. Hah! That lazy Tucker dog has to take a running jump. He's bigger n me, too. He says cause he's bigger he weighs more and gots more to lift up. Lame excuse if I ever heard one! 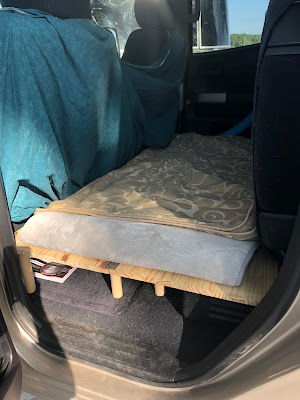 The day before this day I got in the truck and when I gots out I wasn't any place where I'd bin before. I was at the beach. We was camping at a place called Beverly Beach Camptown. The rolling noisy water was practically at our door. So was the three pretty ladies in a camper right next to us. I liked it cause I could get petted whenever they came out. One lady even got down and hugged me and scritched me special like. There was a people walk way right by the back and I could get pats from them, too. We was just that close. The Lady Who Feeds Me took Tucker dog n me down steps to the beach. I likes it. It smells good like food. I found a dead critter. The Lady Who Feeds Me says it was a crab. She pulled it outta my mouth. Rude! It was gonna be good. It was just the right kinda slimy thing. If I hadda found it a day later it'd be perfect for rolling on. That Tucker dog annoyed me onna count he wanted to wrestle and pretend bite. I just wanted to smell some more and maybe find somethin else to eat. That Tucker dog finely left me alone. He went to get a drink of the water. Ha ha. You shoulda seen his face when he got a drink. I don't know if it was onna count of the water moving or cause it was salty. I just smelled good things some more.

The Lady Who Feeds Me got outta bed real early, and of course she stepped on me more than once. Is she blind? Can't she see me lying here on the hard floor right at the end of her bed? Ya know, if she'd a let me sleep on the bed this wouldn'a happen. But no, she makes me stay on the floor. Anyways, she takes me n that Tucker dog out to see the sun comin up. Seriously? This is worth  gettin up at the crack of dawn? I'd a rather have stayed sleeping... preferably on a princess kind of bed. We walked on the beach agin. I smelled more food stuff. Then later, after eating, I jumped back inna truck and we was back going down the road.
at April 30, 2018