Scene Along the Side of the Road: Bridges, Tunnels & Gates

Mr. Dreamy does most of the driving. He has always liked to drive and he is a terrible critical restless passenger. I get to do a lot of the watching. I stare out the window to see what I can see.

One thing that intrigues me is seeing different forms of wildlife gates along the road. Large animals crossing highways cause serious accidents. Animals trying to jump fences may also get injured or suffer a prolonged death if they get caught in the fencing. All states are seeking ways to keep deer, elk, burros, bear, pronghorn, sheep and other large animals off the roads. Some areas use "funnel fencing", an offset, perpendicular fence that encourages animals running along the highway fence line into a one-way gate.

Other highways build dirt hills or "jump outs" that end in a drop off into the open area on the far side of the fence. Animals can go out, but can't get back in.


While heading west on I-80 in Nevada we saw three wildlife bridges under construction. The first was almost complete, but I stared in amazement and neglected to get my camera out. My brain was struggling with why a bridge of that size would be built in the wilds. Then.... I figured it out! 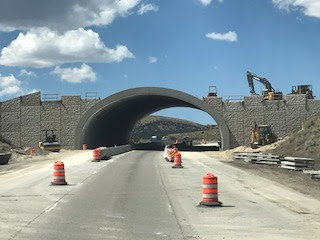 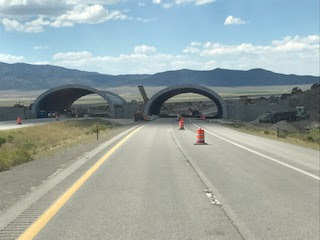 When these are completed, fencing to funnel animals toward the bridges and plantings to make the bridges seem natural will be added. The completed bridges will look something like this rendering of a wildlife bridge planned in Washington state.

There are some smaller species that need to cross highways to get to breeding or feeding grounds. Efforts have been made to find safe passage for these animals as well. Many of those efforts aren't as easy to see. I do recall seeing a sign for a tortoise tunnel that went under the road we were driving on, and I remember reading about the Toad Tunnel in California many years ago. (It turns out the tunnel was for frogs, not toads, but whoever named it, like me, enjoys alliteration! It also turns out that we drove right over the tunnel, in Davis, CA, and we weren't aware of it!) At one point Mr. Dreamy saw some cattle coming up beside the highway from a tunnel under the road as we made our way west on I-80. Not only did I not have my camera ready, I missed it altogether!

For some other interesting animal passages, visit this website.