From the Flats of Utah to the Heights of Nevada

I love the drive from Wyoming into Utah. As you leave Wyoming you begin heading down from the high plains and the hills begin to show more green. They are simply gorgeous. It's a postcard around every corner!

Once we hit the Park City area, the road dropped even more, a whopping 2000 feet, into Salt Lake City, Utah. We have been on this route before. But, this time we turned west on 201, along the southern edge of the lake, to reconnect with I-80 on the west side of the city. This was all new territory for us. Driving along the lake and seeing all of the salt that has collected was interesting. We drove by several mineral companies and two salt companies. The salt from the lake is not used for table salt. It has too many impurities. But, it is used for water softeners, salt for de-icing and industrial purposes. 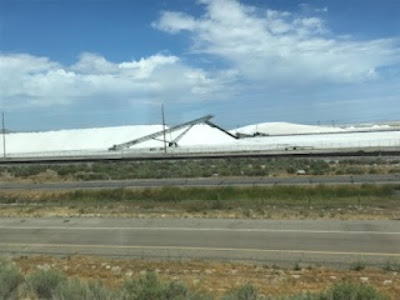 As we moved away from the lake, turning to the west, we encountered signs warning drivers to stay alert. How interesting.

Why had we not seen signs like that before? It turns out that one must drive about 100 miles until he or she arrives at the Nevada border. And, most of those 100 miles are along salt flats, the last 50 miles of which are straight as an arrow, with very little to look at to break up the monotony. Now I understand why they have those signs! 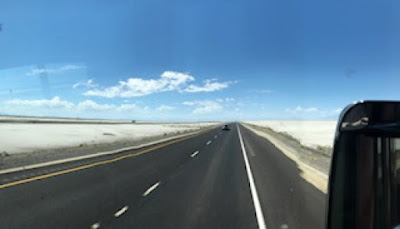 Despite the flat, straight road we did see some interesting sights: 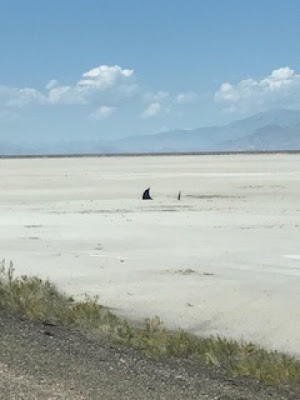 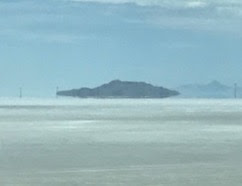 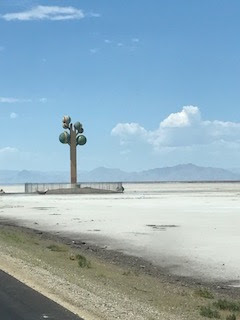 We spent that night in Wells, NV at an older RV park run by owners in their 70's. They were a very caring couple who leant us a battery charger for the Jeep, which decided it had too many things going on to keep the battery going strong. We ended up walking up to a local NAPA store to buy our own charger, a jump box and jumper cables. We do own all of these, but two are with the MINI in storage and one already made the trip to Florida and is awaiting us there! 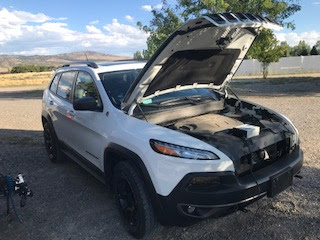 The next day we drove through Nevada. I am convinced that God made Nevada as a reminder of choices we can make in this life that might influence our afterlife. Most of what we saw looked very Hell-like. Wow! Talk about desolate, rocky and arid! And look, there's a dust devil. We saw a lot of them. That ought to be proof positive! 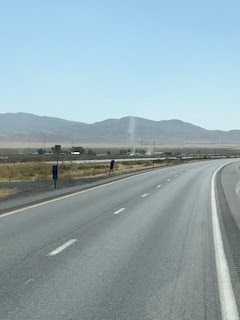 (My apologies to folks who live in and love Nevada. It is beautiful, but at least along I-80 it is rather barren.)