This is out of sequence, but might be interesting to read later on.
We had an adjuster from the insurance company inspect our roof. We were not exactly happy with his report. Oh, yes. Look. There is hail damage on the hot tub cover., he reported. But... oh, no... there is no evidence of hail damage on the roof. All he saw up there was normal wear and tear. BS! But, he knew we were moving and why should the insurance company pony up for something that we won't enjoy. We objected and asked for another inspection. Sadly, they could not get an inspector here in time to get the roof replaced before closing. We did not want to extend closing, so.... $$$$ We'd rather spend some of the profit from the sale of the house to have it sold than to wait and perhaps have something happen to the deal.

On Wednesday the truck rolled in with the materials: 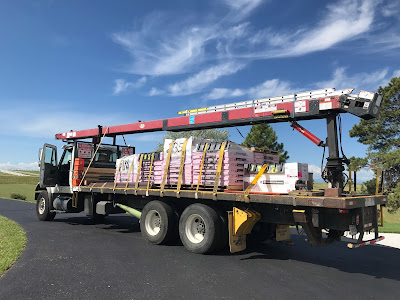 I wouldn't want to be a shingle delivery person. They off-loaded each and every square by hand. 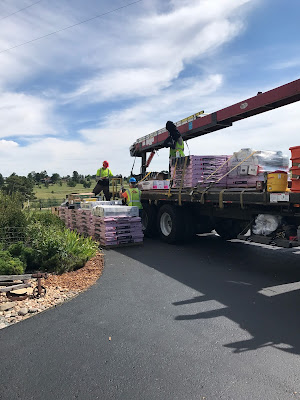 We were intrigued by the process of estimating the material requirements. Our roofer has a program that downloads a satellite image of the house. He can then plug in information about the pitch of the roof, dormers, etc and it yields the number of squares of shingles he needs for the roof. 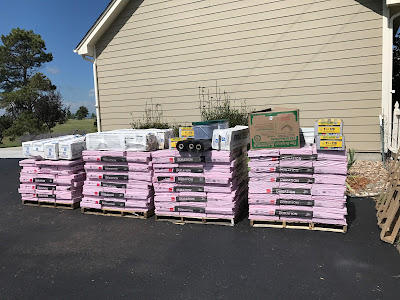 On Thursday the roofers woke us shortly after 6 AM as they walked around the house and put tarps down. The dogs were caught napping! They didn't bark until they heard voices outside the window! 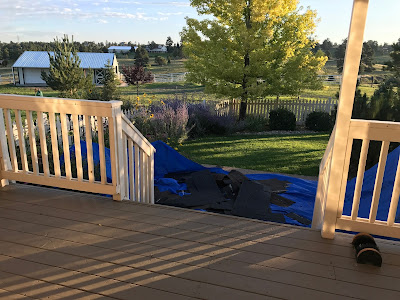 The roofers made quick work of stripping the old shingles off of the roof. I worried about their slipping and falling as our roof is rather steep. My worry monitor was in high gear anyway as when I stuck my head out the back door first thing in the morning a roofer, on his way up the ladder, had the ladder slip and he fell off, landing half on and half off the concrete walkway. He lay writhing on the ground until a fellow worker helped him up. I have to give the guy credit. After about an hour of relaxing he was back on the job. Ouch! 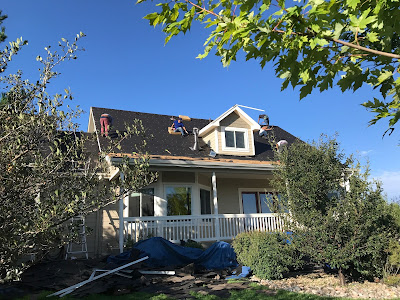 We had a crew of 6 laborers. It seems that our roofer has connections with a fellow who manages several crews of roofers. Each crew has one worker, at minimum, who speaks English. Our crew had another fellow who spoke and understood a bit. The guys worked until 8 PM Thursday evening and finished the back half of the roof. 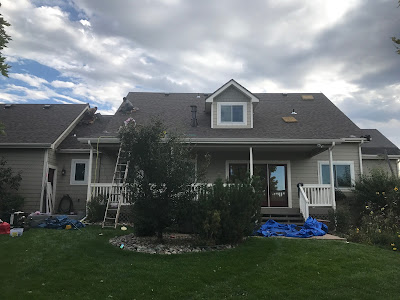 Friday was a bit hotter and the roofers found they had to take a few more breaks under the trees, so they needed to come back on Saturday morning to finish. 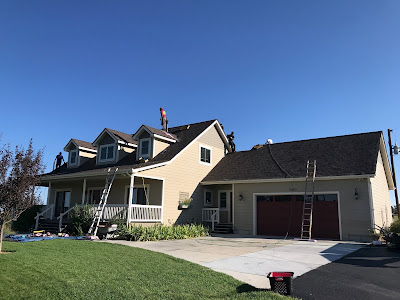 There were nails and bits of shingles all over the place. Not to mention bottle caps, food wrappers and food. Gypsy scarfed up all of the food! She was in seventh heaven! The guys picked up most of the detritus that was left, but I find bits of things each time I step out into the yard.

We now have a new roof to enjoy for a few days as we move the last bit of stuff and clean up the empty house. Oh, and the new owner will enjoy a new hot tub cover! This was one of the rips on the hot tub cover from shingles hitting it, or being pulled off of it. The roofing company is making the arrangements to get a new one. However, the crew will end up buying it. They weren't exactly happy, but they might have felt a bit better when Mr. Dreamy later proffered an unopened bottle of Tequila he found in the back of the liquor cabinet! 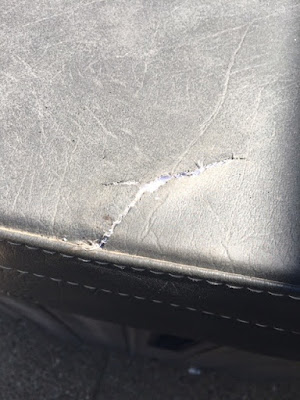 Other collateral damage included a broken "lens" for the upstairs bathroom light and fan. I guess some of the thumps and hammering wiggled it loose and it fell on the tile. A replacement will be on its way soon. The shingles also smashed a solar post light we had on the banister for the front stairs. And wouldn't you know, I just figured out how to get those lights to work?! Well, that will be replaced, too, but the new owner may have to paint and install it.