If it's Tuesday, it must be Tallahassee

Tuesday we toured Tallahassee, Florida's Capitol (with an "o" our tour guide reminded us)! After a bus tour around the city, and, might I add, what an amazing job our driver did at negotiating narrow streets and tight turns with a 45' bus, we stopped at the Florida's Historic Capitol Museum.

I wasn't prepared to enjoy this museum as much as I did!

The building has been returned to how it stood in 1902. The structure was initially constructed in 1845, and had the dome and cupola installed in 1902. Large wings were added as the government grew.  A larger structure was built basically surrounding the original building and its additions in contemporary times. The wings of the older building were removed as they presented a fire hazard, and restoration was begun. The museum had some great exhibits and photos. The chambers for the Senate and Representatives stand as they did in the early days, and the wall sconces and chandeliers (electroliers) are original to the building, with electric lamps on the bottom and gas lamps on the top. In the early times of electricity, they only had power four hours each day! 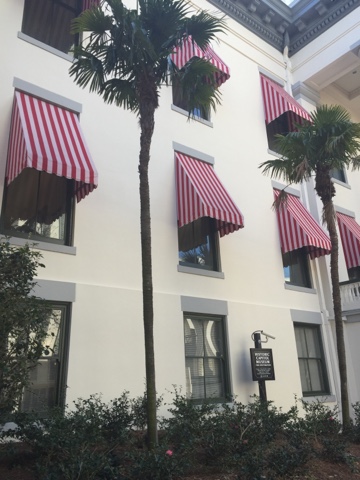 The awnings were used "back in the day" to help keep the building cool. 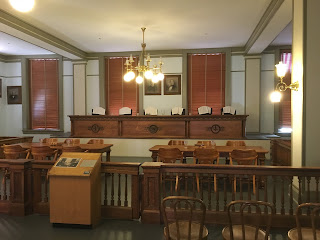 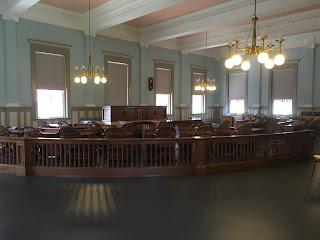 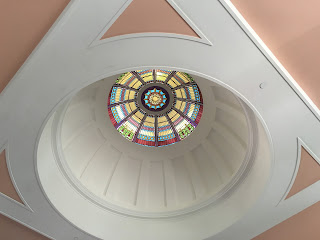 This mosaic was installed under the rotunda in 1953. It was removed when the building was restored to its original linoleum floors, and placed on display elsewhere in the building. 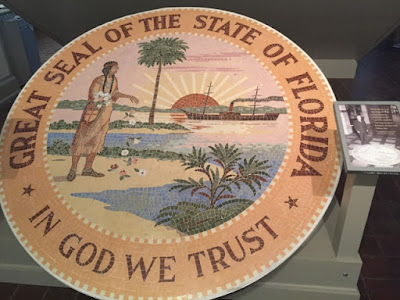 Looking toward the Supreme Court building in Tallahassee with part of "Stormsong",  a crescent of leaping Dolphins that graces the steps of the Capitol. 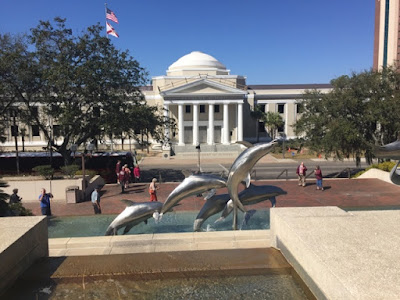 Our next stop was at the Museum of Florida History. This museum traces Florida history from its earliest cultures up to modern times. There are interactive exhibits, video and audio presentations and so much to see. Allow several hours! We didn't, and didn't get to study it all!

The day was truly a capitol(sic) experience!