I am the self-appointed Poet Laureate for Adventure Caravans! It began as a lark on our first tour with the company. I was having so much trouble remembering who was who that I began to make up rhyming couplets to help me make connections. That led to a finished poem that I shared with the group. A staff member from that tour was on our next tour, and asked if I'd do another poem. This time, one of my fellow travelers asked, having been with me on the previous tour. So, here is the introductory poem for our trip:

Here we are at the start of our tour.
It's time for a poem you'll have to endure!
This is something I'm compelled to do,
Writing silly rhymes that might entertain you.
This is my way to learn your names,
And maybe remember from where you came.
I'll begin with me. I'm Cyndi. I'm married to Scott.
We live in Colorado but we travel a lot.
Ron and Mary, as well as Gayle and Wes
All came from the Lone Star State of Texas.
Mary and Ron camp in a white Excel
Mike and Sylvia have one as well.
Mike's the Marine with very little hair.
He wears a cap to cover what's missing up there.
Not to be confused with the Mike, who's with Jan
Who used to be a newspaper editor man.
They are in the van that is so ti-ny,
And come from California, like Karen and Speed.
We have some other folks who travel small;
I'm trying to figure how Ceil, from Michigan, carries it all.
Have you seen all she carries in her little rig?
She even has a small fire pit and one that is big.
Fran lives full-time in just twenty-four feet,
She must be an expert at keeping things neat.
She is a walker, striving for 10,000 steps every day,
While Gayle finds timing her walks is the easier way.
Marie's little Tiger probably lives up to its name;
She camps near Seattle where the roads aren't so tame.
Drew's from Ontario, he's our Canadian rep,
Replacing his oil cap will be his next step.
He had some misfortune on yesterday's ride,
But arrived in good humor, taking it all in stride.
The trailer with the pointed front is Karen and Speed's.
They came from California where their farm has trees.
In the Winnebago Vectra you'll find Judy and Dell,
They have spent time in California as well.
Judy does crafts, as several of us do,
And Dell checks his ancestors to find out who's who.
John and Joyce, Michigan campers of the year,
Live on the road for six months and volunteer.
I forgot to mention that Ron, Mary, and their dogs
Are working to mark off every state in their log.
Sandy, Barbara and Jim we haven't met,
I don't know what to say about them yet.
Bill and Carol, from DC, have staffed caravans since 08.
Just imagine what they've seen in so many states.
Our tail gunners, Jim and Cherrill, always come last,
Stopping to help rigs that the rest of us pass.
There you have it, that's our little group.
I'm looking forward to all that we'll do.
We will have more adventures as we caravan,
Exploring this little corner of our wonderful land. 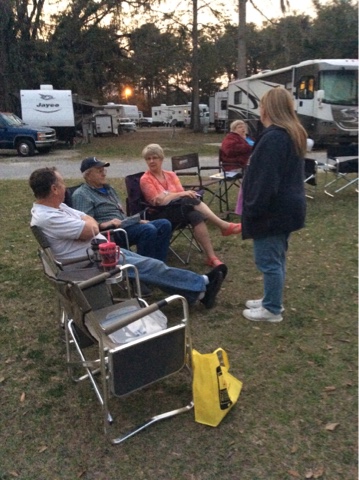 Relaxing after our day exploring Tallahassee.