- or -
The Evolution of a Pickleball Player

I was introduced to Pickleball on our recent visit to Arizona. I discovered an active group of pickleball players in my home town. So, although April's A to Z challenge may have kept me busy... what really occupied my time was playing pickleball - whenever I could! I find the game to be fascinating... and as addictive as a bag of potato chips! Every time I play I want to play one more point, and then one more game and then another. I miss a shot and I want to play some more to see if I can make that shot the next time. (OK, yes, I am a bit very competitive, but I am not the only person who recognizes this addiction!)

I think that learning to play pickleball is a journey. I see myself evolving. I am slowly changing and I am in the process of acquiring skills each time I play. I guess it is a pickling process! Although, that is not how the game acquired its unusual name. According to the USAPA the game was named after Pickles, a Cocker Spaniel owned by one of the co-inventors. Apparently Pickles liked to take the ball, and so the game was called, "Pickle's Ball" and over time was shortened.

However, maybe there is more to the evolution thing than I thought....


Since someone has designed a T-shirt that seems to say it all!

Stages of an evolving pickleball player
(according to Dreaming)

I'm sure there are more stages to my development as a pickleball player, but since I'm not there yet, I don't know what I don't know! Regardless, I'm having a ball! 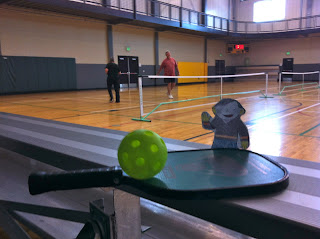 Flat Malia came along to play pickleball with me when she visited.

Email ThisBlogThis!Share to TwitterShare to FacebookShare to Pinterest
Labels: Pickleball