We took a side trip to Mineral Wells, Texas, to do some shopping. (Trust me, Mineral Wells is not the shopping hub of the nation!) Imagine our surprise at seeing this grand building looming over the city of 16,000. 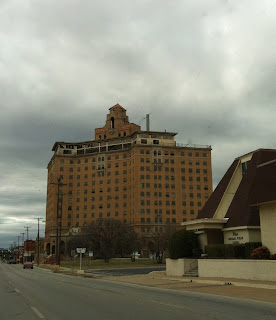 A few clicks on the iPhone and I discovered that this is the Hotel Baker, which opened days after the stock market crash of 1929. 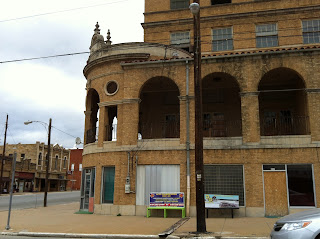 This opulent hotel had a bowling alley, restaurants, meeting rooms, a beauty shop and a swimming pool for guests staying in any one of the 450 guest rooms.

The hotel was built to encourage tourism for local spas where guests could enjoy the healing waters, after which the city was named. 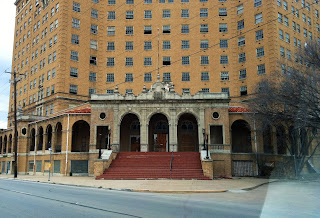 The hotel went into bankruptcy in the 30's, served as a temporary home for military dependents of soldiers at Fort Wolter during World War II, and managed to stay open until the 70's, despite declining visitors. The building is on the National Register of Historic Places and remains vacant.

Upon seeing the derelict building, I couldn't help but think of Disney's Tower of Terror at the MGM Studios.
There is a likeness, don't you agree?

I react emotionally to old buildings. I can almost feel the energy and hear the hubbub of voices from the past. Maybe I have psychic abilities that I have never channeled! People have reported ghost sightings in the Hotel Baker. One reported ghost is the mistress of the hotel manager who committed suicide by jumping from the top of the 14-story building. Visitors have commented that they smell her lavender perfume, hear her footsteps, or see her red lipstick on the rims of glasses. Another ghost is that of Douglas, the Elevator Operator... what? Maybe there is more to the Tower of Terror connection than I thought! Douglas' story is rather gruesome. He was crushed, at the waist, by the elevator. Evidently that part of the story is true. As to whether this was murder, planned to look like an accident, or whether it was truly an accident is left to conjecture. I am not certain that I'd like to encounter Douglas, his upper body has reportedly been seen floating in the air of the basement. But, if I did happen upon him, perhaps then we would know the real story!


What kind of reactions do you have to old buildings?