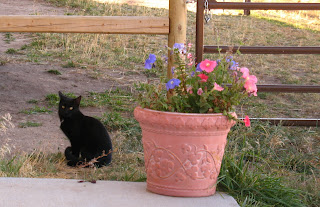 I could spend hours watching the antics of our barn kittens. At 6 months of age, the girls have long been venturing out into the field to pounce on unsuspecting grasshoppers and moths. They chase each other up the trees. They charge out of the bushes and through the horses' legs. They swat at each other from the fence rails. The tussle with each other and fight the shadows.

The other day as we watched the kittens my husband commented on Thing 2, the brave huntress, off to rid the world of bugs and butterflies. She slunk across the pasture, her eyes fastened on her pray. She waited. She twitched her tail. She pounced! Imagine our surprise when she turned and trotted toward the barn with her prize....a ground squirrel! Our cute little kitten had her first kill. Well, almost. Apparently she has not gotten to the lesson on how to kill the prey. Soon she dropped it. Everytime she'd try to approach it, the ground squirrel would raise up, wave its razor-sharp talons and bare it's long, dagger-sharp teeth. Too much for Thing 2! She valiently tried to recapture her prey several times, but alas, the varmint made a hasty retreat to it's burrow. Thing 2 waited patiently for an hour for it to reappear, then finally went off to stalk and capture something she could handle....the ubiquitous grasshopper!
at October 05, 2010