Doc's Diatribe: He Just Doesn't Get It

I wish a scourge of yellow flies on Pippin!
I wish a plague of hungry horse flies on him!
I wish a pestilence of pests on the pesty beast!

And still, he comes back again
...and again to bug me.

Arrrggggghhhhhh!
Will he never leave me alone?! 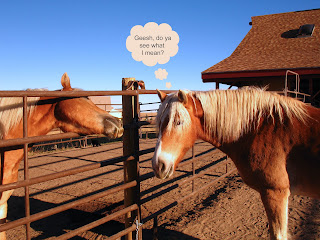