You've Only Had it Two Days and You Already Broke It?

These were my son's words when I IM'd him that we had to take the puppy, now named Tucker*, to the vet to have his leg checked. My hubby was walking down to the barn the other night. Tucker was on his left. It seems, in reconstructing the event, that my hubby stepped off with his left foot, Tucker ran between his legs, and when my hubby, who was looking to the left to try to figure out where the puppy had gone, stepped forward with his right foot, it connected with little Tucker's right hind leg. The outcome: Tucker has two tiny green stick fractures of his right tibia. The vet placed a splint on Tucker's leg and gave us some puppy Rimadyl, telling us that Tucker would very soon get used to the splint and would be running around as if nothing was wrong. She was right. By afternoon, Tucker was hopping up and down the steps to get in and out of the house, and romping on the grass. 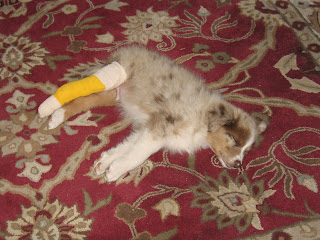 Tuckered out by the day's events
By evening, the splint had begun to slip down Tucker's leg, like a knee sock without elastic. We unwrapped the splint and repositioned, but by morning it had slipped down again. So, off to the vet again this morning. Now, we have no splint and no pain meds. It was decided that perhaps Tucker would take it a bit easier without pain meds and without the splint he would be less inclined to bear weight on the leg, allowing it to heal. 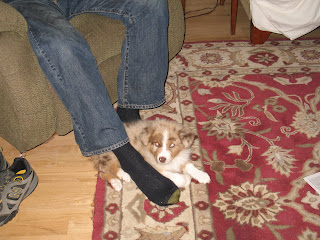 So, life goes on and Tucker seems to be happy and content. He obviously doesn't bear grudges against big guy feet that hurt him! Oh, and did I mention what a great puppy he is? Maybe my son wasn't making snide remarks about the broken leg, maybe he was referring to Tucker being house broken! Yes, the little puppy who had never been in a house until we brought him home four days ago goes to the door and barks to be let out to do his business!

*Thank you to Aurora and Once Upon for the great suggestion of the name, 'Tucker'. We both decided that we liked it. His registered name will be 'All Tuckered Out'. Perhaps he will live up to his name and be a little less energetic than most Aussies...or more likely, we'll be the ones who are tuckered out by his antics!
We cracked up at Mickey's suggested for Haggard, as in Merle Haggard. Clever...but I'd hate to call my cute puppy that name, and we weren't exactly enamored with 'Norman' either!
at June 16, 2010