My Mrs. Owner took Pippin and me on a long ride in the big, noisy box. When we came out of the box we were at a friend's house for something called desensitizing. Makes no sense to me. I've heard that being sensitive is a good quality. It's something I have to work at because frankly, sometimes I could give a flip how others feel. 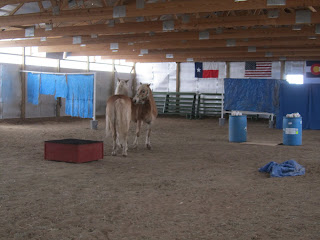 This is a picture of me trying to be sensitive to Pippin's feelings in the friend's arena.

We did all kinds of things at the friend's house. I didn't really like the blue walls that you can see to the left of my shoulder in the picture above. I just knew that I would hit my head and it would hurt if I tried to walk through the wall. duh! Uh, Mrs. Owner, where did you go? My Mrs. Owner is magic. One minute she was with me, the next minute she had tele-transported to the other side of the blue wall.


I liked the clip-clop sound I made going over the fake bridge. Who do they think they are kidding by putting a piece of plywood on the ground? Any fool horse would know that bridges don't sound or feel that way.


The friend had a few tarps on the ground. I've seen those before. Pippin carried one around. I wouldn't touch it. In fact, don't tell anyone but I was naughty. When they weren't looking, I took a whiz on one of them!  Tee-hee, it made a funny sound! 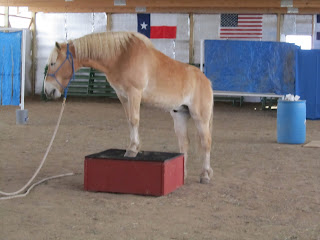 This is me standing on the box.

I really didn't want to get up on the box. After all, I'm not some sort of simpleminded, muddle-headed, brainless circus horse. But the friend was very kind and patient. She tricked helped me. She fed me treats.
Mrs. Owner was busy with Pippin. 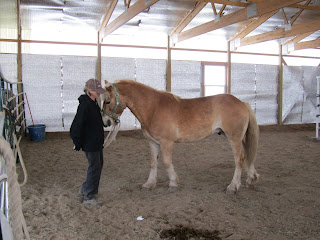 That dang, fool horse was practically crawling on her head trying to get to the treats. He hasn't learned how to act disdainful and aloof.
I had to try on a new saddle. It is called a Barefoot saddle. That's a really silly name because it has nothing to do with your feet. I already have barefeet....four of them. 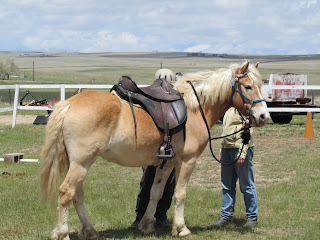 My Mrs. Owner said that I should thank Kimberly of Sallys Saddles for letting me try the Barefoot saddle. It is really pretty. It is really light and comfy. It has a horse head on the saddle flap. You can see it in the picture. What do you think? Does the saddle make my butt look big?

Pippin and I had a chance to see a lot of different things. I usually won't admit it, because I'm that kind of a grumpy gus, but I had a lot of fun.

Mrs. Owner also wanted me to thank Diana for all of the work she did in setting up the arena and for helping me.
at June 01, 2010