One Saddle is Never Enough!

I went to an auction last week and put up a post about the Pariani I bought. Since I already have an English saddle (besides the Pariani) what I intended to buy at the auction was a Western saddle. I wanted something with a little more security for the trail, and something that maybe my hubby might consider using, since it has a built in 'handle'.  I've been casually looking for a Western saddle for the boys, and haven't been able to find anything that fits their somewhat chunky withers. I even tried a wide-tree Tucker saddle and the points of the tree dug into their shoulders. My dear husband and I had already planned to load the boys in our trailer to take a trip to a large saddle shop about 2.5 hours from home, but, thought we'd check the auction...just in case there was something that might work. I brought a template I had made from styrofoam, which I could lay inside a saddle to get an idea of how well it may or may not fit. I found about 3 saddles that might work. One was very strange indeed. It was some sort of English saddle that had morphed into a Western, or visa versa. I kinda know that feeling....I'm an English rider from way back, but I love the cowboy thing out west. So I guess I'm morphing as well. Anyway, this particular saddle got stuck in 'mid-morph'! 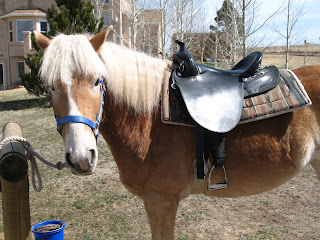 There were at least 3 of us that were interested in this strange saddle. The other two parties had draft crosses and encountered the same problems I have experienced with fitting Western saddles. This saddle seemed to have a wide tree and it was in excellent condition.  I wondered if it had actually been ridden in. It certainly looked weird, but it began to grow on me. After talking it over with my dear husband, we decided that we would bid on this saddle and hope that it would fit the boys. Well, obviously since Doc is modeling the saddle, we were top bidders!
The saddle had a stamp for the saddle maker; D. Galli from Las Vegas, NV. I found his web site but could not find any pictures of saddles that looked like this model. So, I emailed Doug. Boy, was I surprised (and pleased) to get a return email within a few hours. Doug wrote, "OMG! That is one of my saddles that I made 4 years or so ago.The design came about when I was asked to make several saddles for the UNLV  mounted police.  I had black leather left over from that project so I decided to make a couple more without all the police gear.

The saddle has an Equiflex tree from Steele Saddle Tree Company and I used grade 1 black drum dyed Wickett and Craig leather . In total there are only 6 like the one you have including the ones that I made for UNLV."
Anyway, I'm thinking this is kinda cool to have such a unique saddle. I  love it. And, since I still don't have a Western saddle..........
at April 21, 2010

Email ThisBlogThis!Share to TwitterShare to FacebookShare to Pinterest
Labels: saddle