Scene Along the Side of the Road: Farms

Our drive through central California seemed long and frankly, boring. However, the monotony was broken by observing the produce along the side of the road and speculating on what was being farmed. Sometimes difficult to do as you zip by the rows of crops. We have heard that central California is considered by some to be the “bread basket of the nation” and could see that it earns that title. We saw the more traditional row crops, including pumpkins, spaghetti squash and melons. Some fields were being prepared for replanting. Then there were the trees. We passed miles of orchards and groves. We saw citrus being picked. At 60 mph it looked like lemons and limes. We saw nuts being harvested. I could pick out pistachio trees by the grape-like clusters near the end of the branches. We guessed that the there were walnuts, and later in our journey, almonds, mostly because of signs identifying huge hulling operations. We saw acres of dead trees as we moved south, along with signs pointing out “No Water = No Jobs” and “Congress Created Dust Bowl”. Water allocations have been battled for years, and it seems tensions have risen in an indirect relationship to the decreasing rainfall of the last years. As we moved further south in California we began traveling through an area where table grapes are grown. Seeing acres of grape vine arbors covered in tarps to allow grapes to mature out of the hot sun, and seeing many pickers beginning the harvest, I realized that there are a lot of unseen costs in producing just about any crop. I came to appreciate grapes brought to me at the grocery store at $1.99 a pound. As we turned toward the west, near Bakersfield, CA, and continued toward the Arizona border we saw different sorts of farms: those collecting energy from the sun and the wind. 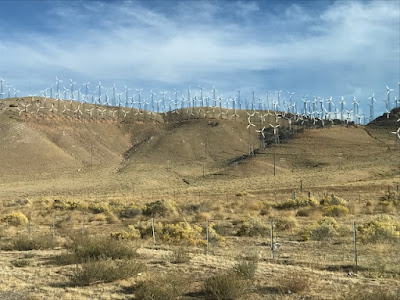