Our first California stop was in Napa. We weren't seriously thinking about settling here, but it has an RV park that is somewhat convenient to our son and family in Oakland. We arrived around 2 PM... and it was 103° out. I was dripping by the time we had the RV parked and set up and took the dogs for a very short walk. They are sacked out on the floor and don't seem inclined to step outside!

The RV park is part of the Napa Valley Expo facilities... a nice way of saying the fairgrounds. However, I must say that the park is upscale for fairground facilities we have stayed at in the past. We have nicely paved sites with grass all around.

The weather remained warm through our visit in Napa, and continued as we went on to the KOA at Petaluma. The weather was in the triple digits, even in San Francisco. Air conditioners were sold out. People were miserable.

We were waiting for furniture to arrive from storage. On the evening of Oct 8 we were rocked to sleep by the winds. Around 2 AM I awoke and smelled smoke. I debated getting out of bed and climbing the levee to see if we were in imminent danger. I decided that was unlikely as the Sacramento River was between us and the land to the west, and that property had previously burned. Later in the morning we learned that fires had started in the hills near Napa and Sonoma. The fires would go on to burn 245,000 areas over the next 3 weeks. The smoke from the fires precipitated our earlier-than-planned departure from California. Then air quality was terrible and Scott found it difficult to breathe. 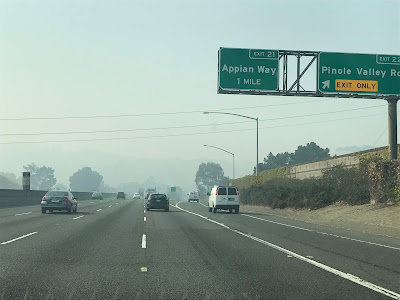 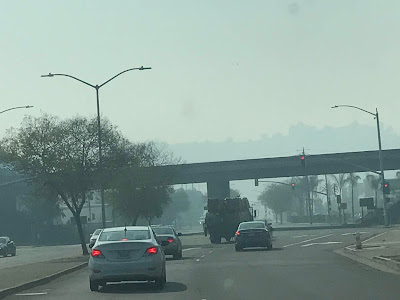 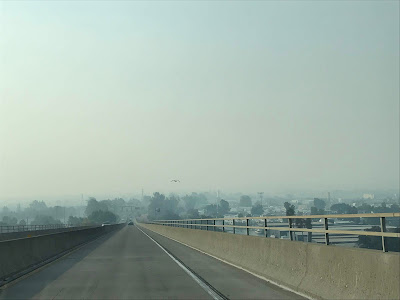