It's Not the End at RiverBend!

I haven't posted in a while due to Internet issues we experience when we are on the road. Most campgrounds now have WiFi, but all of the campers collectively are trying to suck a swimming pool worth of connectivity through a garden hose. We get a trickle at best.

However, now we have Internet at the new house. We don't have much in the way of furniture... but we can get online!

So, I will go back in time to a few days following Irma's landfall in Florida on September 11. There were 13 residents of the RV resort who weathered the storm in the resort's clubhouse. They soon were without power and water, and cell phone connectivity was sketchy. However, we did get reports that all was well. There was little structural damage throughout the resort, no flooding and only the plant life was damaged by the storm. Within a few days staff from the resort took pictures of each of the 315 lots and set up a drop box online so that residents who were far away could see their property.

These are pictures from our lot: 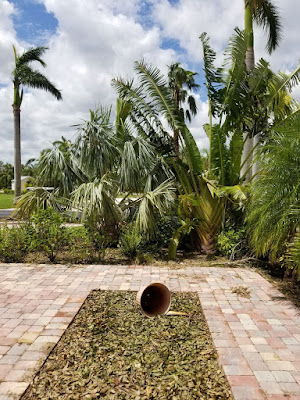 The Royal Palm (on the left) lost most of its fronds. However, one of the onsite managers said that within a few days he could see new growth coming up on the Royals. Our Bismarck Palm (center) is very droopy and looks like it lost fronds. The fan-like palm on the right has some fronds broken in the middle. I wish I could have been there when the picture was taken. It would have been interesting to see if straightening the bent fronds and splinting them would have kept the fronds alive.

The center part of the picture with all of the leaves (and a stray pot) was actually just sand. This area used to be grass and we had pavers installed in all but this one area, where we planned to put in some fake grass sod. We may have to add some more sand before we get around to adding our "grass". 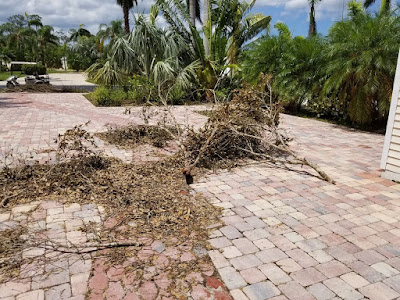 Considering all of the trees that are behind us, this pile of limbs is not all that impressive.  I had nightmares that the tree would fall in the storm. The tree was one of the reasons we picked this particular lot. We like the shade it provides! 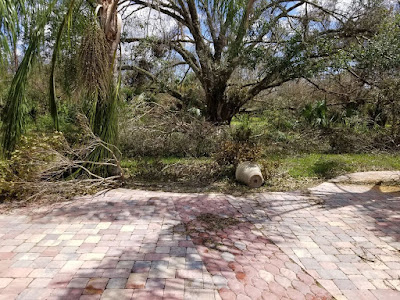 This view of the back of the lot shows more damage with fallen limbs in the foreground and by the oak. That oak 3' or more in diameter and it seems to have lost a lot of smaller limbs. It isn't on our property, and may not even be on the resort's property. We had intended to clean up around it anyway, our cleanup just may be a bit more extensive! 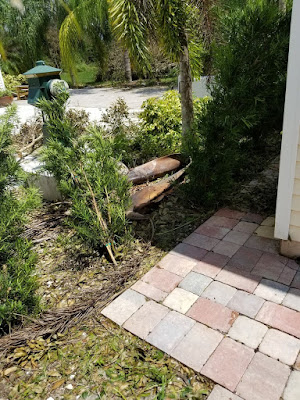 In June we had pavers installed on our property wanted a paver walkway behind our "coach house" (storage building). The original shrubs were removed as they had grown tall and leggy, and were in the way of the pavers.  We replaced the shrubs with Podocarpus. This one is leaning. It looks like at least one of the shrubs was broken. 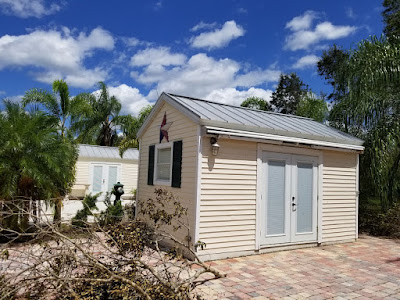 Our coach house sustained no visible damage. But, it is strange to see the neighbor's coach house. We will have to give the podocarpus some time to recover, grow and bush out. 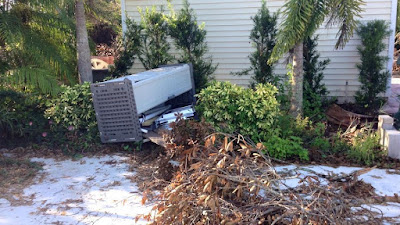 This is a shot of our neighbor's property and his storage cabinet. It is possible that the cabinet caused some of the damage to the shrubs we had planted in the spring.