We visited Jekyll Island and enjoyed a tour of the club and cottages. Beginning in the late 1800's, a club was begun for the wealthy. Members bought into the club for $600. A large clubhouse was constructed, and several of the members bought additional property to build "cottages". The cottages were not what most of us would picture when we hear the word "cottage"!


As we were leaving the clubhouse,  having enjoyed a fabulous buffet, we stopped by the Georgia Sea Turtle Center. I loved the center and I am so glad that we visited. The center is relatively small, but it is packed with information and hands-on activities that invite attendees to learn more about sea turtles, the environment  and our role in protecting and sustaining plant and animal life. While going through the displays you learn about the lifecycle of the sea turtle and the different things that can impact the turtles, things that I had never considered such as the temperature of the water. Speaking of temperature, It is interesting to note that the sex of a turtle is determined by the temperature while they are nesting!  (Later we learned that the same thing is true with alligators.)

When you arrive at the sea turtle center you are given a card entitled "My Sea Turtle Journey". As you go through the center, learning more about the life of a sea turtle at each station, you randomly select a stamp for your card and the stamp determines your life as a sea turtle. 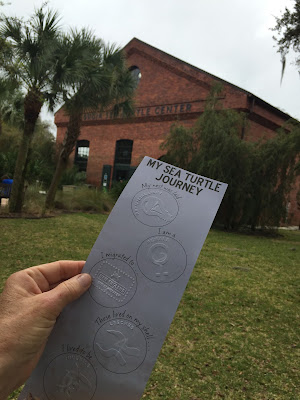 I was hatched under an artificial light situation, which means that upon hatching I might become confused and not know which way to go to get to the sea. I was a female turtle and I migrated to New England because I got caught in currents. I have to be very careful to make my way back south and not get caught in cold water as the season changes. If the water gets too cold my body functions will slow down to the point where I won't eat and might not even be able to swim. Most turtles have some sort of organisms that live on them. Some of these organisms don't impact their health and may even be helpful, others are not. I ended up with leeches which would suck my blood and could make me weak. I lived to be a juvenile turtle which means that I lived to be about 15 years of age.

We attended a "Meet the Turtles" presentation. If you happen to visit the Center, be sure to stick around for this presentation. It was very interesting. Our guide told us about each turtle; how they arrived at the center, what their condition was and how they were doing.

A few of the tanks had mirrors angled over the tanks so visitors could see the turtles. 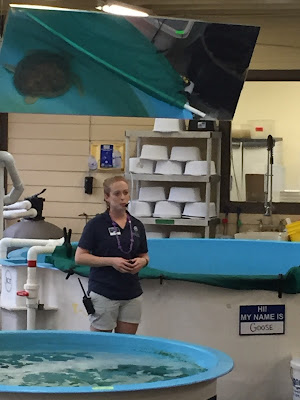 Most of these pictures are Kemp's Ridley turtles. When they tried to migrate to warmer, southern waters, they were caught in the "elbow" of Cape Cod. The water turned cold and the turtles' activity slowed down. They could not eat, and they had difficulty swimming. They were rescued and sent to the Georgia center for rehabilitation. 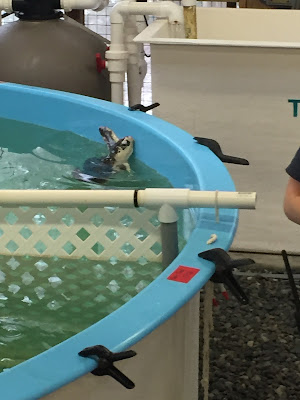 As the waters near Jekyll Island warm up, the Kemp's Ridley turtles will be released. 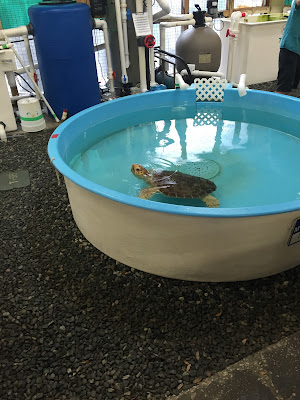 This Green Sea Turtle was also impacted by cold water. He was finding it difficult to swim, so he was placed in a wading pool within the tank so he didn't have to expend energy to try to swim to the surface of the tank to breathe. As he gets stronger, the wading pool will be lowered, and eventually taken away. 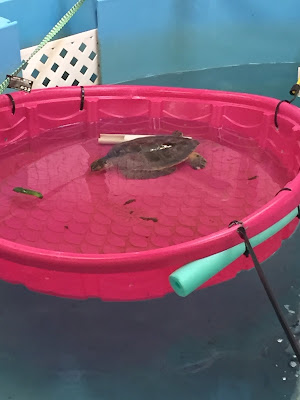 The turtles at the center receive a number and a name. The turtles who were rescued in the Cape Cod area have Ben & Jerry's ice cream names. Popsicle is one of them. Dredge was rescued by.... a sea dredge! 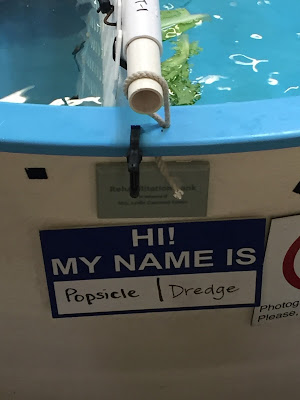 In addition to the sea turtles, The Center rescues land turtles and fresh water turtles. Many of these are also on display until they are strong enough to be released.