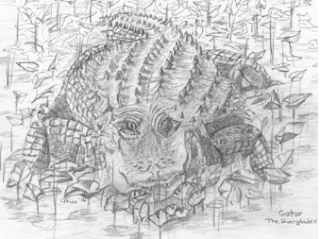 We have seen more than a few alligators on our trip. The first alligators I saw were some babies in a tank at Pecan Park RV Reaort in Jacksonville. Although they are well fed, I felt sorry for babies being confined to a tank, and I felt sad for mama gator, having her babies taken. A mama gator probably can't/doesn't  experience emotions as the reptilian brain is more primitive than that of mammals and lacks a limbic system, where emotions are formed. But, I want to attribute emotions to mama gator as she will fiercely protect her young, even carrying them gently in her mouth. 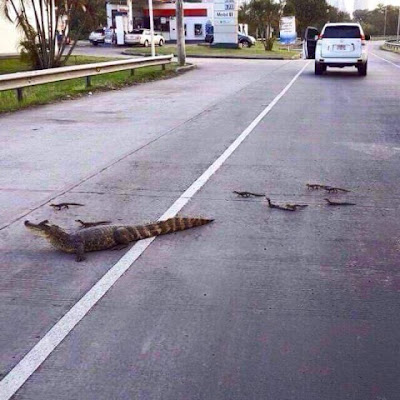 Denis Philips put this shot on Facebook taken near Palm Harbor. FL. Aren't they cute? I wouldn't get very close!

Our group had its first sighting in the wild while on a glass bottom boat tour at Silver Springs State Park. We saw two gators. Our guide thought the larger gator was about 8' in length. The smaller gator, about 3 feet long, may have been a two to three year-old offspring of the first gator. The young gators have brighter yellow stripes on their tail (as seen in the one above) that begin to darken and aren't as evident when the gator is about four. It isn't unusual for young gators to stay near mom. Generally, we were told, a gator will grow about a foot a year.


As we ventured further south, we encountered more gators. We saw a few in The Everglades, and even spotted gator crossing signs. (I had to borrow this image from the Internet as I was never ready for the sign as we drove along the road.) 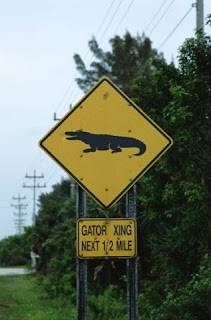 I saw dozens of gators on the boat ride through the Okeefenokee swamp. The weather had warmed up a bit and the gators were coming out of hibernation to bask in the sun. There were also many swimming in the water.  I was fascinated by watching them sink as our boat neared. They didn't leave a ripple, but simply submerged, like a submarine. Then, with a flick of their powerful tail, they vanished.

Another interesting thing I learned is that birds will nest in areas where gators are found. They know, instinctively, that their nests are vulnerable to raccoons and snakes. Prey that gators will feed upon. A symbiotic relationship has been established. The birds nest above the gators. The gators benefit when the occasional offspring falls from the nest.

This is a picture (again, borrowed from the Internet as I missed the shot as we drove by) of egrets nesting in the trees above the St. Augustine Alligator Farm. 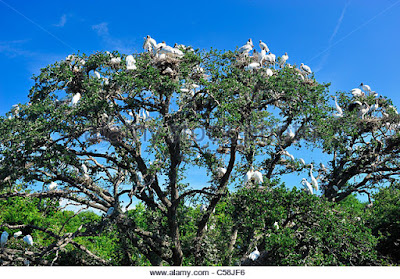