Our tour took us to Charleston, SC. We lived 90 miles from Charleston for 34 years, and saw things on our tour that we had never happened upon when we lived so close! That always seems to be the way.

Adventure Caravans arranged for a short city bus tour. We had a delightful guide who was the epitome of a southern belle: accent, hat and all. She shared all kinds of stories with us about this lovely old city.

We took a boat ride out to Fort Sumter, where the first shots of the Civil War were fired. We had a fantastic park ranger on board who told us the history of the fort with such animation, the audience couldn't look away. The fort is on an island in Charleston harbor, and was a formidable structure in its day. However,  shelling during the early battles of the war left much of the fort in rubble. The old brick bastions couldn't stand up to the heavy armament and the 'new' technologies of the day. The fort was reconstructed in 1870, with modifications, and then, following the Spanish American War a concrete battery, or gun emplacement, was put into the center of the old fortifications to house long rifled canon. This was part of a major coastal defense network.


Fort Sumter and the battery emplacement.
The walls of the fort are a bit lower than they were during the Civil War.
On our tour of Fort Sumter, the ranger explained about the network of forts that formed the harbor defense system during the Civil War. She pointed out Fort Moultrie on Sullivan's Island, on the north side of the Charleston harbor. We Dreamers later hopped in the car and took a brief tour of that fort. We were surprised (as we were uninformed or had forgotten this chapter of history) that there were bunkers, or batteries at Fort Moultrie as well.

One of several batteries on Sullivan's Island
This one is at the corner of Fort Moultrie.

As we left the fort, we found more batteries, along the beach of the island. A little poking around led me to discover that the lower tip of Sullivan's Island had been purchased to form the Fort Moultrie Military Reservation for coastal defense around 1900. This was closed after World War II as it could no longer play a significant role in defense, but the batteries were never removed. Some of the batteries are visible from the road, and are owned by the town. 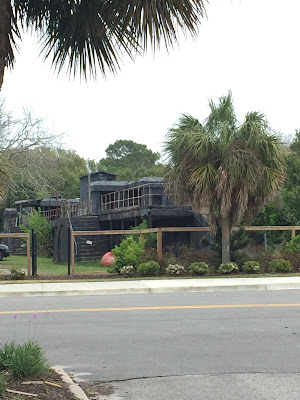 Others are shrouded in wild muscadine grape vines, and can barely be seen poking out from the trees. It seemed a perfect venue for a haunted house in the fall! One end of one of the bunkers has been repurposed as the town library! 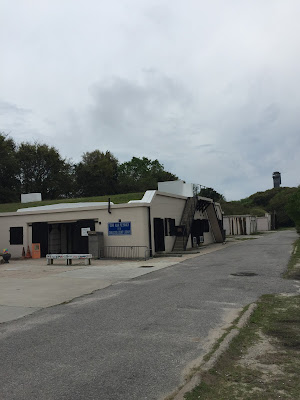 One can't help but notice the Sullivan's Island lighthouse. We could see this landmark from Fort Sumter, in the middle of Charleston harbor. Once we were on the island, we had a better view of the lighthouse. It is not your usual lighthouse! This is one of the most modern lighthouses in the US. Instead of rebuilding a typical cylindrical structure, this one was constructed in the early 1960's in a triangular shape. At 140' in height it looks very tall, but there are over 20 lighthouses in the US that are taller. What this may have over them is that due to its more modern date of construction, it has air conditioning and heating... and an elevator! 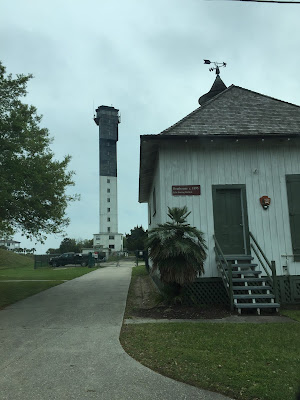 In 1989 Hurricane Hugo came ashore near Sullivan's Island. The category 4 hurricane brought winds of 135 mph and a storm surge that was 13 feet high. It destroyed 15 percent of the homes on the island, in some places wiping out 3 rows of beach homes. It severely damaged 40% of the remaining homes.
While driving through the island we saw many lovely homes. The newer homes are constructed on pillars to be above the flood plain.

This post has gone much like a pin-ball game, bouncing from one topic to another! Perhaps it is time for the ball to come to rest!