I feel like we were given a "Get Out of Jail, Free" card today. 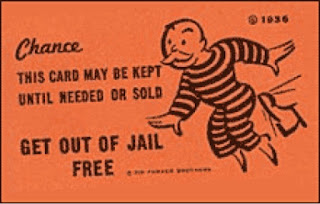 Our repairs at Red Bay were finally complete. It was a painful process on this trip.
We came in with a few minor problems.
We found more problems.
Repairs caused problems.
The repairs didn't always go well. They were painful, if not comical, to watch.

For example, we had a shade that wouldn't go up when one pushed the button. It would inch up, literally, with each press of the button. (I am still wondering why the design engineers felt people need shades driven by a motor when using shades with the old spring system is far faster and easier?!) The techs played with it and decided the motor was faulty. They removed the bracket holding both shades, motor and all, and replaced the motor.  They climbed back on board, connected the motor to the wires, remounted the bracket, taped the wires up into the valence and pressed the button. Nothing. No whirring sound. No moving shade. At least before the shade would function to some degree. Down came the whole mechanism again, out went the techs, and they began the process again. They returned and began the process of reinstalling the system, again. I forgot to mention that this bracket with shades and motors is mounted inside a wood valence with scant room for a screwdriver, let alone tech fingers trying to locate the holes from which they had removed the screws. I also forgot to mention that the screws are only about 3/8" in length and were, if judged by the number of times they dropped them, difficult to hold onto. Oh, and I forgot to mention that the mechanism had to be removed and replaced a third time because the end of the plastic "tool" used to adjust the limits of the shades broke off inside the adjustment screw, so they had to take it all out to extract a tiny piece of plastic. Oh, and the shades, once installed and working, came down at an angle, so more fiddling with the screws had to happen. I am not certain who was more frustrated! 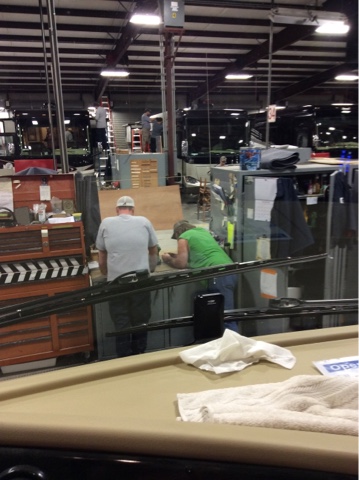 Mr. Dreamy, do you think the techs are ignoring us?

We had some other repairs that went equally poorly and took far too long to accomplish. I won't go into all of the details, but the sink faucet was adjusted twice. Once on the first day of repair, and again the next day. The drawer that had to be removed to effect the repair had to be reattached the correct way three days later, so it would latch correctly.
The leak in the shower was addressed twice, in two days, and on the third day another technician had to adjust the shower so a cover could snap into place.

Every night we spent at the campground caused more problems for the technicians, because each night we would discover something else that needed repair, or re-repair. Things that were quite insignificant, like a piece of molding that was missing, or a bay door that was difficult to unlock with the key. And that was where we were screwed! Although we wouldn't discover that for another 5 days.

On Friday we had a new satellite dish installed, as I mentioned in my previous post, and shortly afterwards an annoying, repetitive beeping sound signaled something was wrong. Some of the 12-volt electrical items failed to work, and since the control panels for lights, hot water, heat, etc are controlled by the failed system, those systems were inoperable. An experienced technician disconnected those items that were causing the shorts so we were able to live comfortably through the weekend. Miraculously, when the systems were reconnected on Monday, they worked... at least, so we thought!

All repairs were completed by noon and we were told to go back to our camp site and try everything to make certain everything worked. We did. It didn't. The new dish failed. The techs had to come out. They tried their best to diagnose the issues.  They had to crank the dish down by hand, standing on top of the motorhome in the rain, so we could return to the service bay. The dish was DOA. It was replaced. All seemed to work well, until Mr. Dreamy mentioned the door and bay locks would lock, using the remote system, but would not unlock. We'd have to return for yet another day.

This morning we pulled into the service bay.

The techs assigned to that bay locked the doors, couldn't unlock them, and scratched their heads. They checked with the antenna guys.

The antenna guys locked the doors, couldn't unlock them, and scratched their heads. They checked with the experienced technician.

The experienced technician locked the doors, couldn't unlock them, and scratched his head. He checked with the engineers at the nearby electronics supplier.

The engineers from the nearby electronics supplier locked the doors, couldn't unlock them, and scratched their heads. They checked with an installer at the plant. 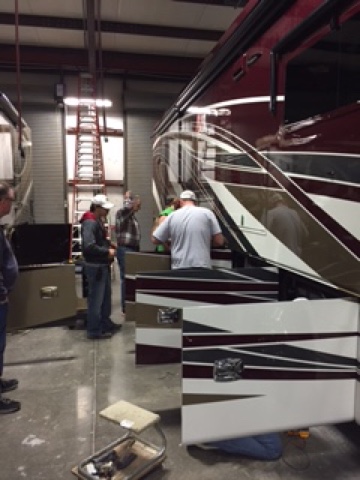 The installer locked the doors, couldn't unlock them, and quickly isolated the problem to the lock mechanism in the bay door that was repaired the previous week. It seems that when the tech reassembled the lock after lubricating the mechanism, a screw nicked a wire that caused all of the problems.  Yup. Screwed!!