Have a Busy and Productive Day

One of my favorite elementary school principals used to end each morning's announcement telling students and teachers alike, to have a busy and productive day. Well, yesterday, Dreaming lived up to that ideal! She was going from dawn 'til dusk!
It was sunny. There were only a few puffy clouds in the sky. It warmed up during the day to 80 degrees.... but the weather predictions were saying we'd get down to 28 last night (that ol' weatherman was pretty accurate... our thermometer said we got down to 29). I wanted to get all of the outside projects taken care of before the weather changed and before we left on our trip. So, Dreaming was as busy as a one-armed barber with hives yesterday. Lucky for her, Mr. Dreamy had to get up at 5:00 AM, so she got a head start on the day, too!
The deer (more on them in another post) have been rubbing on our new, young trees, so every tree now has a cage of wire around it. Each tree also received a deep drink of water. 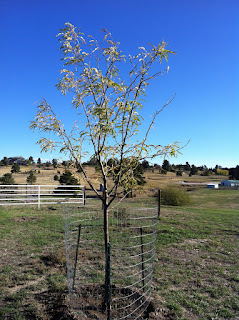 Mama Boots now has a ramp going up to her escape hatch in the barn, so the bales of hay that used to be her launch platform can be used to feed the black horses (plus one) who will be coming back to visit while we are away. 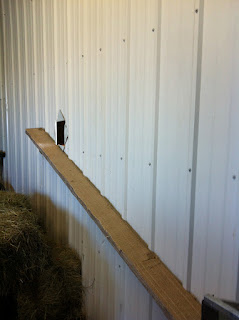 Braided wire fencing has been put around a scrap pile in the paddock and around the septic tank in the front pasture. A few panels were moved to fence off the manure spreader and drag harrow in the back yard. Now the horses will have a few more places they can graze with less chance of getting into something that might hurt them. Wire fencing was put back up in the front yard so the horses can have access to the approximate one acre of grass out there... but won't be able to get to our cars or gardens.

I walked the perimeter of the pasture fence and repaired one place where the deer had pulled the top wire down, but the wire going to the ground is still making a snapping sound - so maybe I need to do a bit more investigation.

I drained and detached all of our hoses from their spigots. The hoses have been coiled. Do you coil your hoses up after each use? I used to, but this summer it seems like I was watering something every day. It hardly seemed worth it to take time to coil up the hose when I would be using it again in so few hours.

I cut, or pulled up, our tomato plants and brought them in to hang in the garage. I've never tried ripening tomatoes this way, but was told that the green tomatoes will continue to ripen on the vine. (During this time I also had an email conversation with Gail, At the Farm. She suggested digging up the tomatoes and bringing them inside. We tried. They were so top heavy they kept falling out of the pot. I gave up in frustration... perhaps with a little exhaustion thrown in to temper my mood!) 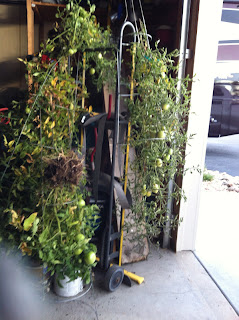 The tomatoes were hopelessly entwined around each other and the tomato cages. I finally just yanked the plants up, cage and all. The cages actually made handy tomato plant hangars when placed over the top of the dolly!

I also collected green tomatoes in a box to let them ripen. Nope... I won't do green tomato relish - that's not my thing... I don't think! I pulled most of the carrots, turnips and beets and brought them in as well. I'm letting some of the root veges remain in the garden for a while longer.

As I was finishing up in the garden the front began to move in. The temperature began to drop and just as I walked into the house, the front hit us with wind gusts up to 35 mph! Perfect timing! The perfect end to a dreamy day! 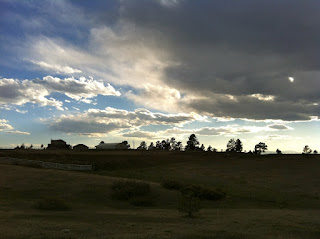 Whew! It was quite a day! Dreaming visited dreamland pretty early last night! And, now, another day has begun.