When I visited the Shaker village in New Hampshire I was intrigued by the similarities and differences between the Shakers and the Korseshan Unity community. As I wrote the entry about the Shakers, I realized I never posted my entry on Koreshan. So I will rectify that oversight. Here is a post that was originally written in March this year.

We Dreamers visited the Koreshan State Park in Estero, FL. The park includes buildings from the Koreshan Unity community, a utopian society founded by Cyrus Teed in the 1870's in New York. Teed established a few communities and garnered followers in Chicago and other northern states, as well as a small group in San Francisco, before establishing the "New Jerusalem" in Estero. The community flourished in the early 1900's. Teed's vision was to build a city of 10 million people. He had an elaborate plan, with a very structured governance. However, the unity declined following his death in 1908. The last to join the society in 1940 was a German woman escaping Nazi persecution. In pictures of the society I noticed there were a lot of women and children. A park docent explained that this society, like other communal living arrangements, offered a promise of lifetime care in exchange for all of one's goods and money. In an era where widowed women or unwed mothers had few opportunities to support themselves and their children, a commune was a haven of succor.
The surviving buildings and land were given to the state by this last surviving woman. 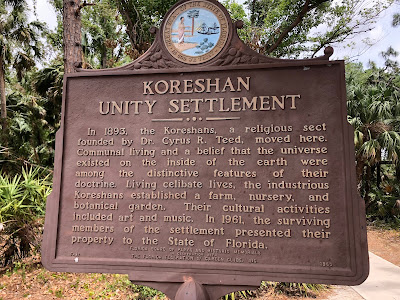 Cyrus Teed lived in a large frame house. This is his sitting room. Other rooms in his home served as classrooms. Education was valued in the community.


Arts were an important part of the society. The Koreshans were known to produce elaborate plays and those outside the community would come see the entertainment in the arts building. The building is still used for concerts and community theater performances.

Teed espoused the position that the stars and sun existed in a central orb, and the planets were on the inside of a rotating sphere surrounding the stars, planets and sun. 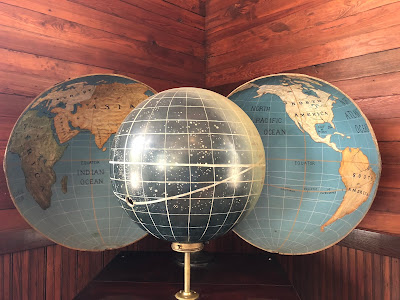 Teed set out to prove his "Cellular Cosmogony" theory by purporting to measure the concave nature of the earth with an elaborate structure of large beams. This is a model of his measurement device. 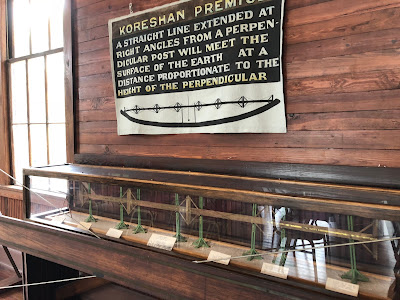 Teed's vision for "New Jerusalem" was pictured in this painted map. The central core of the community would included the property that was used in creating the utopian community in Estero. Large streets would radiate out to huge apartment style homes and business buildings. 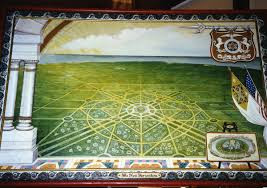 The Koreshan flag, which still hangs in the art building today, reflects Teed's design for his utopia. 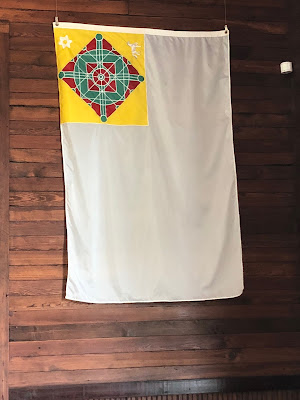 I was intrigued by our visit. There is so much more to learn and understand about this community and their beliefs.
at June 04, 2018