I saw it first.

Well, I got to it first.

Yeah, but you run pastted the clump of grass.
I flushed the turkey out.

I chased after it fastest than anything.

Sometimes we think the dogs are like kids, arguing about who gets the front seat, or who gets to drink first, or who gets to go out the door first. So, this conversation may really have gone on between Gypsy and Tucker.

On my morning walks with the dogs we often come upon turkeys. One day a Tom fanned out his feathers to try to intimidate us. Most often the turkeys turn and go away from us. The dogs are really curious. They tug on their leashes and want to go after the turkeys in the worst way. 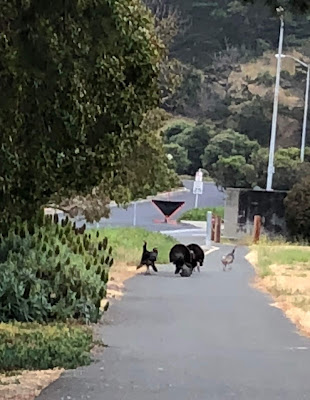 Recently the gate into a large open area that once housed some sort of huge industrial tank, was open. I figured this might be a safe place to let the dogs off their leashes. Safe for the dogs, perhaps. But it certainly put Mama turkey's life in peril!

The dogs came upon her in a clump of grass. She flew out, with two dogs in mad pursuit, not even thinking of paying attention to my calls to come. Tucker gave up first, returning to the clump of grasses. Oh no! He was walking away with an egg in his mouth. He put the egg down and I was able to keep him away. I replaced the egg using some dried grass to pick I up. 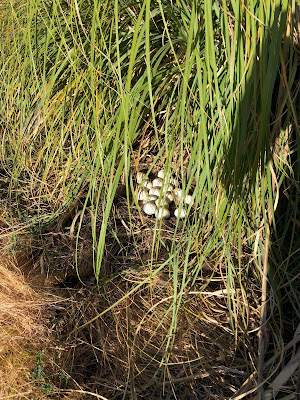 I don't know if Mama will accept the egg with a bit of dog slobber on it!

I guess we won't be enjoying off-leash time in the tank field in the near future!