We took a trip to the Jonathan Dickson State Park near Jupiter, Florida, for a "shakedown cruise" of our Airstream camper. Before we head west in it we wanted to test out all systems. We did discover a water leak. After having driven through heavy rain we found a bit of water on the floor at the front edge of the camper. There were only two other issues we found that must be addressed. One is that the dead bolt lock can only be locked if you lean heavily against the door. There is no way to lock it from the inside. The other problem we discovered is that the awning is a bit longer than the brackets, and thus doesn't fasten securely. We had a few other small things... like adjustment issues and some cosmetic things. But, this post isn't about the camper!

While we were at the park we took a trip down the coast to the Loggerhead Marinelife Center. We took a tour, and learned a bit more about sea turtles than we had already known.. and just a bit more than what we could have read on placards at the center.

Like the Georgia Sea Turtle Center we visited two years ago, the Loggerhead Marinelife Center is striving to be a leading authority in sea turtle education, research and rehabilitation. There are many turtles undergoing rehab, and information is displayed about each turtle. It seemed that most of them were malnourished and lethargic.

Each turtle had a placard describing where he/she was found, his condition and his treatment. This information, and the turtle's progress,  can also be found online. A quick check online let me know that TFD is no longer receiving parenteral nutrition. He is eating well. 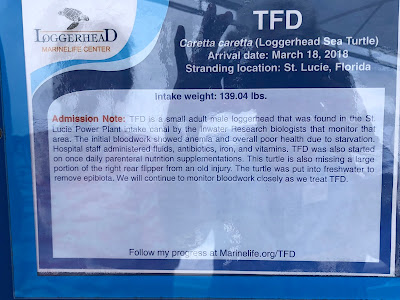 Each turtle is housed in a fairly small tank. Sometimes the tank is divided for smaller turtles. The tour leader explained that the turtles are supposed to rest and they don't want them swimming a lot. 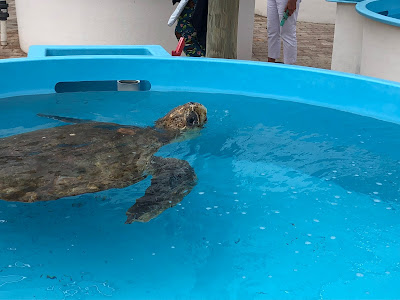 Turtles could often be seen "sleeping" with their head propped on the bottom of the tank. 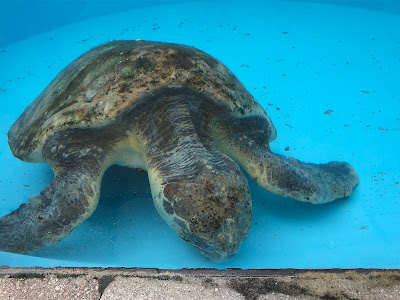 This is Tiffany, a Hawksbill sea turtle. 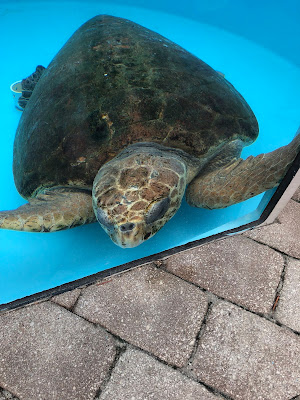 DeeDee and Lil' Buddy are Green sea turtles sharing one tank. This species of turtle has green fat. As adults they are the only sea turtle that is strictly herbivorous. 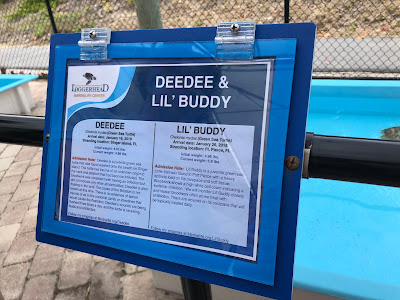 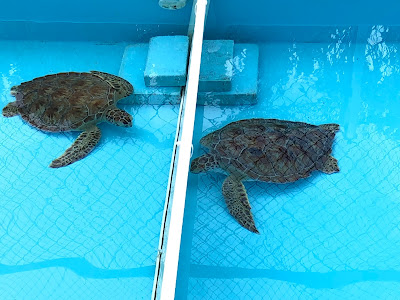 The center has a large veterinary hospital with viewing windows (presenting a bit of a challenge to get pictures without reflections.) The day we visited a new Loggerhead sea turtle was brought in. He is now a patient at the center and has been named Sebastian. I watched as they took measurements of his size and weight. Then he was scrubbed. This picture shows him after his bath. 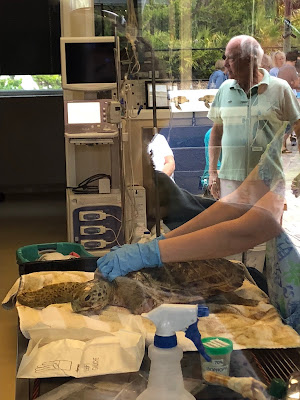 A few other patients were waiting, not so patiently, for treatment of one kind or another. The turtles are strapped onto the tables. 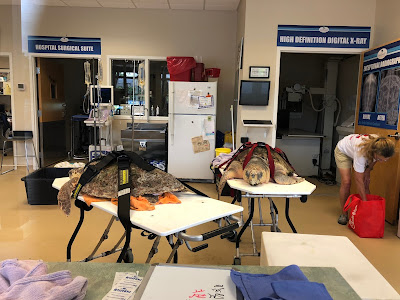 The center is involved with monitoring sea turtle nests on the beaches. Sea turtles apparently return to the beach where they hatched. They lay 80-120 eggs that may be fathered by different males. Sea turtles may return up to 5 times to dig nests and deposit eggs. The eggs incubate in the sand for about 60 days.  The temperature determines whether the babies will be male or female. If the turtles hatch at night, they crawl toward the water, directed by light reflected from the stars and moon. There have been programs for years to teach people with shorefront homes to turn off their lights or shield them. Turtles that hatch in the daytime will often be the targets of birds and other creatures. The center will collect a nest that is hatching at the wrong time, and release them at night, or even take the babies out to floating islands of sea weed. Many years ago I was lucky enough to see a nest of sea turtles as the babies began to emerge. It was truly an amazing experience. Since it was morning, members from the local turtle-watch organization came to collect the babies and release them later that night. Turtles generally begin to hatch in June. It won't be long before the center is busier than ever!