This winter I participated in a mystery quilt while staying at RiverBend RV Resort. The instructor gave us fabric requirements a few weeks before the start of her 4-week class. I had fun shopping online and settled on some fun fabrics from Bear Creek Quilting and from the Missouri Star Quilt Company.

Each week the instructor gave us the instructions for one row of the quilt, and told us to use a light, a dark and medium fabric choices. These are images I found online of the first three rows presented to us.

I used various combinations of the lights, darks and mediums I had purchased and created the first 3 rows. The 4th row was completed when I was not at the resort. Although the instructor gave me the pattern, I wasn't thrilled with it. The fourth row had triangles and I liked that the other rows were all squares and rectangles. So I made a decision not to include row 4 in my finished quilt.

Then, I looked at my rows, and made another decision. I didn't particularly care for the light fabric I had used in one of the rows. That's OK I said to myself. I'm accomplished enough to use my seam ripper and carefully remove, and then replace the squares I didn't care for.

Here is the row in progress of the change: 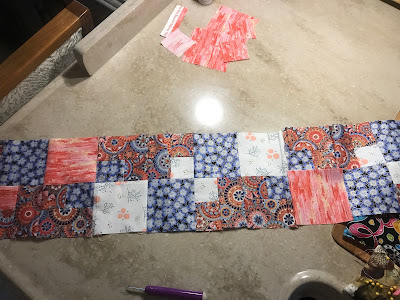 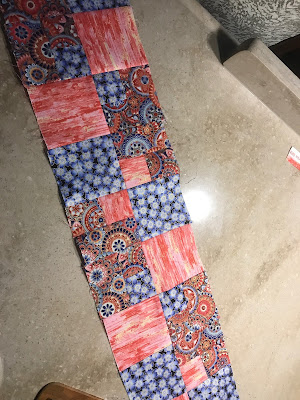 I started puzzling about how to put the three rows together. I looked at them this way and that way. I tried them with sashing between the rows and without sashing. I then had a big "Ah Hah"! I decided to cut two of the smaller rows and piece them together, so the top of one would have the bottom of the other, and the top of the other would have the bottom of the first. Confusing?? Not really. I pulled the larger row apart and inserted a butterfly from the backing, and put butterflies in on the sides. 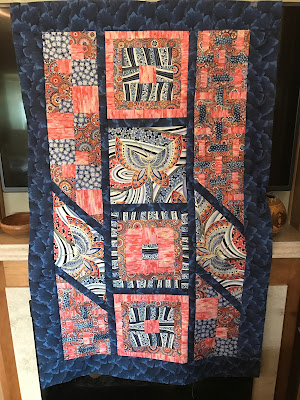 I'm not totally a fan of how the quilt "balances", but it was fun to try something so totally different. I finished by quilting it on Bette, my 1955 222K. While in the process, she developed a terrible squeak with each stitch she made. 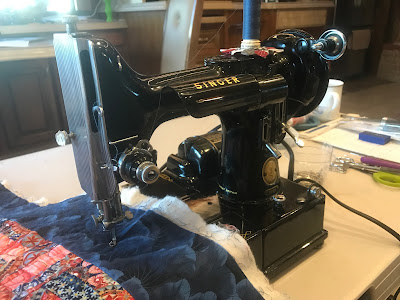 I stopped sewing and pulled out the oil. The squeak was coming from the head. I oiled everything. The squeak remained, whether I ran the machine or rocked the hand wheel manually. I just couldn't find it. The next morning the squeak was worse. I was seriously worried as Bette has always purred along quietly. I was concerned that I had done irreparable damage by making her work for hours as I quilted. I brought out the engine stethoscope Mr. Dreamy has, hoping to isolate the location of the squeak, and took off the embroidery foot for better access. The squeak was GONE! Doh! 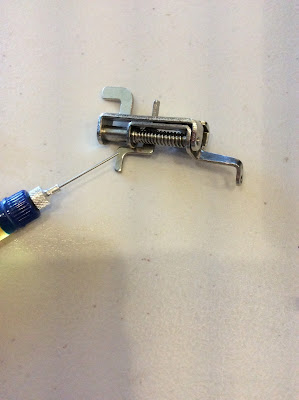 I took my finished masterpiece that I named "Constructed. Deconstructed. Reconstructed." down to hang it on the fence in order to get a shot of it with a pretty background. The Percheron's came up to inspect it. 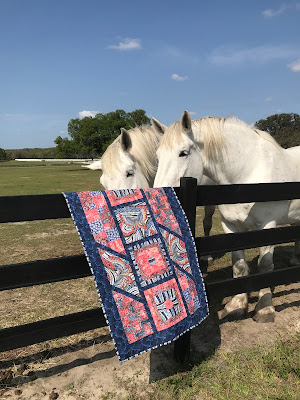