The Tiffin Rally was fun. We Dreamers came up a day early, and boy were we glad that we did. We had the opportunity to sit back and watch as over 150 motorhomes tried to come into the KOA campground on opening day (There were 300 motorhomes in attendance). KOA campgrounds are usually nice. They are clean. They are predictable. They often have narrower roads with more camp sites tucked in here and there that require a bit more maneuverability.

This post was wiped out by one of the rally attendees. Apparently he turned too soon and now he'll need some bodywork and painting.  At one point we heard that the motorhomes were backed up on the highway trying to get into the KOA, where they had three lines of motorhomes at the entrance feeding into two roads in the campground. One fellow told me it took him one hour and 20 minutes from the time he entered the park until he was parked at his campsite. On top of that, the area is experiencing above average temperatures. Hot tempers and hot temperatures aren't always a good mix. 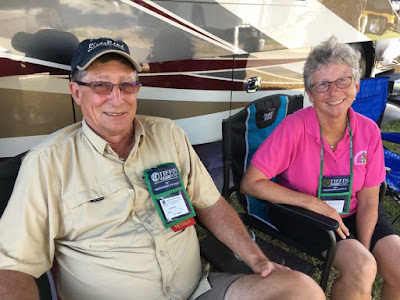 The first night of the rally we had folks over for Happy Hour. I discovered that there were 7 other couples from RiverBend coming to the rally. I gave them each an invitation to our site on opening day. In addition, we Dreamers met some folks in RedBay on our way to Florida before Christmas. I sent them an email. I knew of a couple from Colorado who were also attending, and sent them an email. What fun! 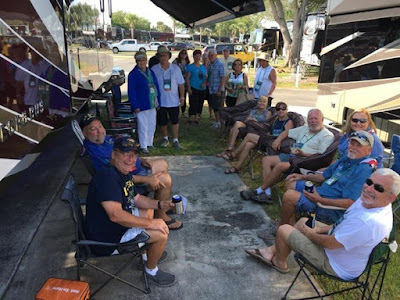 Throughout the days of the rally we often bumped into each other. It was nice to see some familiar faces in the crowd.

In addition to the three items that Tiffin offered to fix there were other vendors who had service folks for their components. So, while we were here we also had maintenance performed on our tow bars and AquaHot system, and received a free radio system update and a check on some component of the A/Cs. How pleasant to have technicians come to us!

The rally had a buffet dinner each evening followed by entertainment. The first night's dinner was a fiasco. I am thinking that Golden Corral, the provider, had never dealt with 600+ hot, hungry people. Each evening improvements were evident and the process of acquiring our food became faster. We were entertained by a country music group, and a blind singer and piano player - Sarah Getto. Look her up, she is amazing! 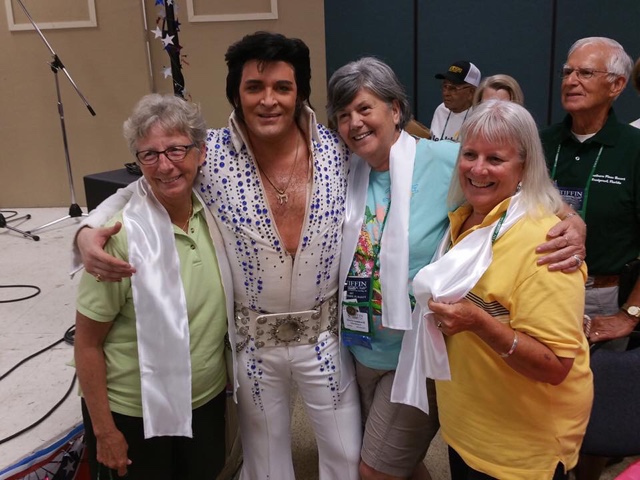 And Elvis came back for an evening, as Dwight Icenhower wowed the crowd. 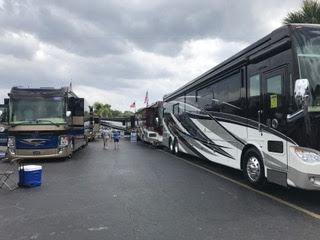 And of course, there were new motorhomes to drool over. We Dreamers hopped on and off the coaches several times. We saw a few changes we would enjoy having, but not enough to want to buy a new motorhome. We were intrigued by Tiffin's new Class C 24' motorhome, the Wayfarer. It was quite roomy inside and the use of space was well thought out. Perhaps some day we will buy something like that. We could leave our big guy in Florida and travel back and forth in something a bit easier to maneuver, and something that has far better gas mileage. Who knows. Could be. Some day....
at April 09, 2017