I dumped my dogs at the flea market. Seriously! The campground in Jacksonville has a flea market next to it. I take the dogs over there to walk as they have large expanses of open grass, all surrounded by fencing. On a recent Saturday we had our usual morning jaunt. I walked into the flea market, which was just beginning to come to life, to deposit the little baggy of doggie doo in one of their convenient trash cans. I never fail to garner attention when walking two fairly large hairy beasts. This was no exception. Within moments I had several vendors coming by to pet the dogs and admire them. One vendor asked if they were going to the groomer. The groomer? Says, Dreaming, as she vaguely recalled seeing the groomer’s “shop” at the flea market on a previous trip. The groomer! Thinks Dreaming, with a lightbulb popping up over her head showing that she had a sudden, brilliant idea. I executed an immediate U-turn heading to the groomers. Where again the hairy beasts drew attention. A bath and brush out? Of course. Why not! So, off I went, returning to the motorhome minus two dogs. And, yes, I did go back to the flea market a few hours later to get my dogs out of hock by paying the reasonable fee for washing and brushing said large, hairy beasts. Their nails were trimmed, their hairy paws were clipped and they were clean from their ears to their tails… or to the stub of a tail in Tucker’s case. 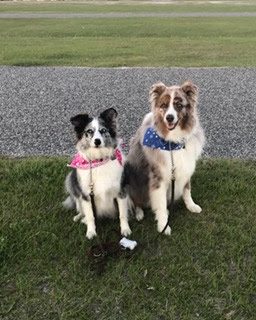