Today I experienced a first. I had to call my knight in shining armor to rescue me while I was out walking the dogs. I wandered into an awkward situation. I was caught in a hostile position and held hostage…..
by a puppy and his yardmate!
We almost made it past the yard. The older, wiser dog ran at us, barking furiously and then retreated. But the fun-loving pup gamboled after us, tackling Tucker. Naturally my goofy Aussie wouldn’t ignore him. I had no choice but to turn around and return to the yard. The older dog was on guard and fiercely protected his domain while the pup pounced and played. Just picture me with two biggish dogs (70 lbs and 45 lbs) on leashes and a pup running figure 8’s around them, around me, between our legs and having the time of his life (his yardmate being a grumpy Gus kinda dog). I called out. No response. I tried approaching the house and Grumpy barred his teeth and snarled. I stood in the yard, well more realistically, I danced in the yard valiantly keeping leashes from entangling my feet whilst not trampling the puppy. Had the owner been home he probably would have been laughing heartily, with no inclination to come out and rescue me, bringing the curtain down on his entertainment!


I was able to get close enough to the house to loop the dogs’ leashes on the hitch of a truck parked in the yard. Grumpy, with some sweet talk from me and knowing my beasts were held at bay allowed me to knock on the door. No one home. What’s a gal to do? I couldn’t continue on my way and risk having the pup get hit by a car. I tried sternly telling the pup to go home, to stay. He wasn’t having it. He’d lie down in his bed in the open garage, then when I grabbed the leashes and turned to go, he’d come charging out. It was a fine game! I thought of putting the puppy in the bed of the truck but worried he might try to jump out and get hurt in the fall. So, I had no option but to call Mr. Dreamy to rescue me. I needed him to bring the car wherein we could deposit our dogs and whisk away faster than the puppy could run. 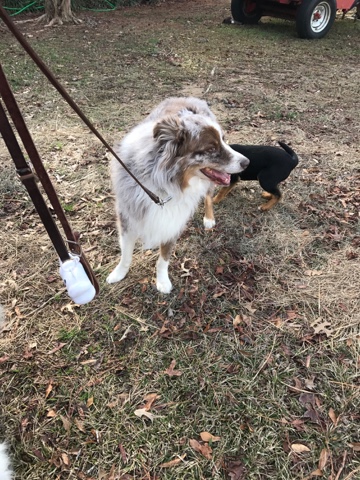 I told Mr. Dreamy about my predicament. I explained where I was located. I had wandered away from the Tiffin Service Center and was walking in a neighborhood across the road from the hospital. He said it would be no problem. He knew about where I was located. At most I was a quarter of a mile away. Great. So I stood my ground. Well, I continued my dance. Only now, Gypsy was getting tired of the pup’s antics and she was snarling at him. So I had to try to play puppy keep away to preserve her dignity, with a puppy who simply wanted to play.
Time kept ticking by. No Mr. Dreamy. OK, I get it. He had to walk from wherever he was to get to the car. He had to work his way out of the service center. The minutes seemed to go on forever, as they do when you really want something, like kids waiting for Christmas! Finally I parked my dogs again and escorted the puppy to his bed. Once again I told him to stay, very sternly. I dared to take a circumspect peek as I yanked the leashes off of the truck’s hitch. He was still in his bed. I walked out of the yard, catching movement from the corner of my eye. I ducked beyond some bushes, fretting that the puppy would run out into the road. As I turned the corner I saw that he had stopped at the street. I guess he had tired of the game. He let us escape.
As my knight had still not come charging over the horizon, I gave him a call to let him know I had made my way out the clutches of my captor and could make it back to the campground on my own. Oh, and by the way, I asked, Where. Are. You? It turns out that my knight thought he knew where the hospital was. Maybe the town has two hospitals?! He was a bit chagrined when he realized where I had actually been held captive, and he gave me a tiny wave as he drove by!
at January 04, 2017