I have been sewing quilts with my vintage machines. (I wrote about the machines here!) I attended a "Sew-in Saturday" at a local quilt guild and met an amazing young woman. She also admires the Singer Featherweights and owns 10 of them. Oops, Shhh! Her husband thinks she only has 9, the 10th was still in its packing in the garage! She came over to our house to make a "table" for her Featherweights. (That's another Blog post!) While she was here she greased and oiled and tweaked my second Featherweight. She has learned how to service her own machines. Oh, my gosh!  After she worked with my machine "She" became so quiet. I found out from my new friend that many people name their machines. Names for my machines became evident to me as I got to know them. The first machine I acquired, a 1947 model, was christened as "Sewphia Claire". Claire passed away last year. She is my DIL's grandmother, and I have some of her "stash" to use in future quilts. My second acquisition was 'born' in 1938. I named her after my Mother-in-Law. Moving forward she will be called, "Elizabeth". But... I digress! 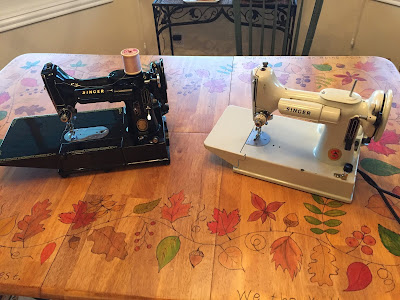 When UPS delivered the free arm, the black machine, we discovered notes to "Bette" from someone who had serviced the machine. 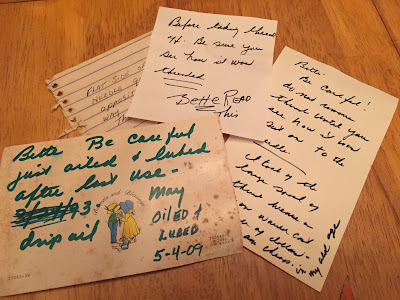 Then, FedEx delivered Hubby's machine Number 2, the white  machine, circa 1964. I opened the carton, and immediately gagged. Bleech! The case, the accessories, and the machine smelled of mildew. Not just a little bit. Enough that the case, the manual and the cardboard box for the accessories went out onto the porch to sit in the sun.... for several days! The machine sat on the table and gave off wretched, mildewy odors. Yuck! The machine had to be called "Stinky"! Nothing else was fitting.

Mr. Dreamy set out to work on the white machine. He pulled out the hook and cleaned all of the pieces. He reassembled the machine and adjusted a drive shaft, and.... oh, my! The machine actually does work! After cleaning most of the machine, inside and out, it no longer smelled quite as bad. So.... she will now be called "Flower". Flower was the skunk with a leading role on "Bambi". Or,.... maybe she should be "Betty White"?!

And.... the illness quest continues. Mr. Dreamy found a bargain machine that wasn't in very good shape. Most recently he has been working at stripping its paint so he can repaint the machine. It has proven to be quite the task. 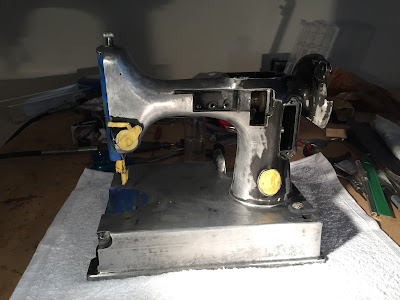 Besides sewing with the machines, what is my role? I have been working on restoring the cases that came with Elizabeth. The handle on the case was half off, and the wooden bottom was split and in danger of falling off. I  removed split rivets to take off the hardware on the case, and then began the task of removing the Tolex cover. The covers were originally applied with "hide" glue. This glue has been used for years for adhering wood for furniture and instruments. It is water soluble, so dunking the case into hot water for a few minutes loosens the glue so that the cover can be pulled off. 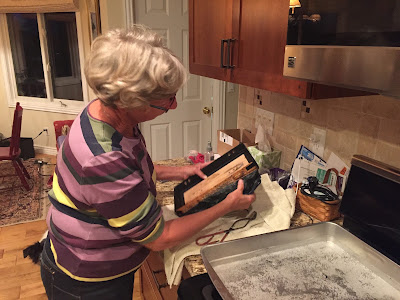 I ordered new "Tolex" material and we have "hide" glue. When I run out of sewing projects, maybe I'll have a moment to finish the case!

And what's next?! What knows! More machines? More refurbished cases? No matter. Life will be  interesting!