Merrily We Roll Along

We left Florida, headed for the Tiffin factory and service center in Red Bay, AL. Our travels had been uneventful. The sun was out, it was a tad more windy than Mr. Dreamy likes, but all in all, things were going along quite smoothly. Then.... 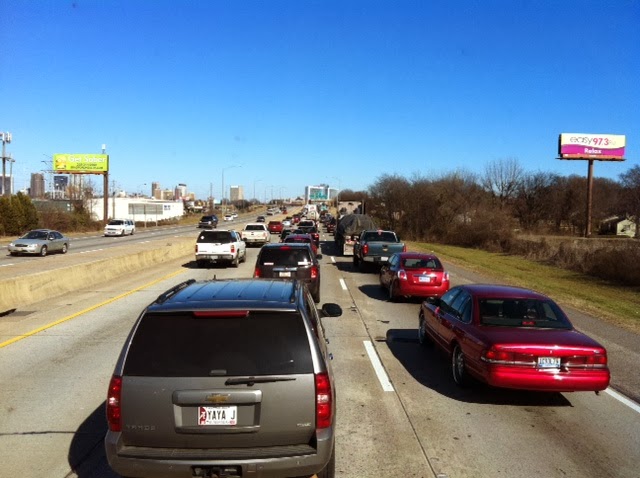 traffic slowed to a crawl. With the new Google map, one can see how the traffic is moving - the route will be red, yellow or green - oh, and very dark red. The route in front of us was dark red. There was a symbol on the route showing that there was a traffic incident ahead. (Our technology is so awesome!)

Did I ever mention that patience is not one of Mr. Dreamy's strongest points? He was not taking kindly to this disruption of our day. Of course, he was the one driving inching forward, not I. Well, actually, I did get to experience it for a few minutes. Mr. Dreamy had been talking about the need for a break. Now with the traffic situation, that break was going to happen even later. So, Mr. Dreamy stopped the coach, put on the parking brake and turned the seat over to me. I hopped in and began driving rolling forward a few feet at a time. After a bit, Mr. Dreamy came back and reclaimed his spot. I was grateful. I am not experienced at driving - this stint at the wheel added another 1/2 mile to my 100 mile total. This sort of driving was fine - it really was my speed, but I worried about the traffic clearing and everyone speeding up. I need not have worried! We spent some more time inching forward. I made sandwiches. We inched a bit further. I enjoyed watching a passenger in the car ahead of us get out and dance on the Interstate. A few more inches. I considered making a sandwich for the truck driver next to us. We moved along.... slowly.

As we progressed we could see police cars ahead. They were blocking the road at an exit to downtown Birmingham, AL. Three lanes (plus a 4th that came and went on the breakdown lane/shoulder) had to merge into one lane. It was slow going. Then, we were dumped on a fairly typical city street. Mr. Dreamy was not particularly happy. Any patience he had, had long ago been used up! Thank Heavens for Google maps that showed me the route to direct him (the GPS wanted him to turn back and take the onramp for the Interstate - yes, I know there is a feature to have it provide a detour, but we've never tried it before). With only a mile of small city blocks, and stops and starts at almost every intersection, we were able to get on an expressway that led to the next Interstate we wanted, and we were on our way.

Not so for the poor hapless soul idiot who decided to drive around the road block.... I do wonder just what the police had to say to him!