Fort Clinch was one of 42 masonry forts built as a seacoast defensive system for the United States as part of the Third System Fortifications established by Congress following the war of 1812. This particular fort's construction was begun in 1847, however the area has been occupied on and off since the early 1700's. The fort saw active duty during the Civil War and again during the Spanish American War. Restoration of the fort began in the 1930's as a CCC project, and it became part of the Florida State Park system shortly thereafter.

The fort has daily tours with period reenactors that do an excellent job of describing life in the fort during the Civil War. 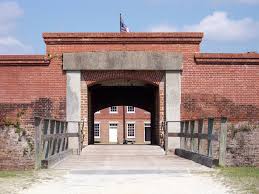 We were met at the gates by an officer who began to harass us about our disorderly line. He marched up and down the line telling us it was time to 'get tough' and that we were in the army now. It was fun to see the children's eyes grow large.

Each area of the fort had docents in period costume who explained what we were seeing and made us feel like we had truly taken a step back in time. I was given a hard time for having short hair, not wearing a hat and letting my legs show!

In one area of the fort we heard the delightful music of a flute playing on the breeze. We finally discovered the musician in one of the underground passageways.

The fort has several reenactments during the year, as well as candlelight tours.  I found the tour by candlelight be be particularly illuminating (I couldn't resist that!) as far as giving visitors a feeling for what it was like in the day.

The fort fell into disuse when rifled armaments came about, as the walls would provide no shelter from ammunition that had that much power and weight.

All pictures courtesy of Google images