Things are slowing down at RiverBend Motorcoach Resort as more and more folks crank up their engines and head to cooler climates. We will be here until the end of May, then will head to Rochester, NY for my high school reunion.

I mentioned the seafood lunches in my last post, and said I'd write more about them. The lunches are amazing because of the quality of the food, and the fact that it all happens because of volunteers. The chef and his wife used to own a seafood restaurant in Rhode Island. They began offering lunch every other Friday as a service to our community. He runs the kitchen and she manages the "front of the house" and the orders.

Early in the season I contacted Chef's wife. "I'd like to help," I said. She indicted she had more than enough volunteers already. I was heartbroken. Then, at the last minute, one of her "beverage" gals had sciatica (it's tough getting old), and I was "IN"!! I wandered from table to table, offering glasses of tea or water or more ice. I did this a few times and then they needed help in the kitchen, at double the pay! Both "jobs" are great fun, but in some ways I think I prefer the "behind the scenes" tasks.

For the last seafood lunch of the season I had the opportunity to work in the kitchen, again. My job was to place the uncooked seafood in small plastic bins for the chef. The orders were brought in by the "waitresses" (more volunteers), a post-it note was created listing the dishes needed for each order and I'd take the note and place fish in one bin, scallops in another, shrimp in a third and so forth for each ticket, and stack the bins. Then, I'd stack the bins for each order and place them on a platform above the chef. He'd take the orders and soak the food in batter, then drop it into the large pan of breading. 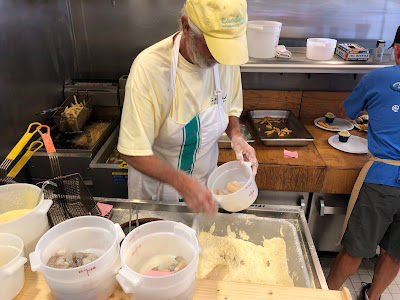 Chef would stir the food in the crumbs, then turn around and put the items in a fryer basket. (Some of the seafood is also baked in a small oven.) Chef also fries 150 pounds of French fries! 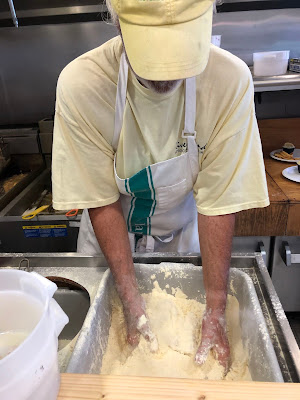 While orders are coming in, and food is being prepared, orders also come in for "Chowdah".  On average, 20 gallons of chowder is served for lunch, or in take-out containers for dinner. My friend who dishes out the chowder also prepares pieces of key lime pie for dessert. 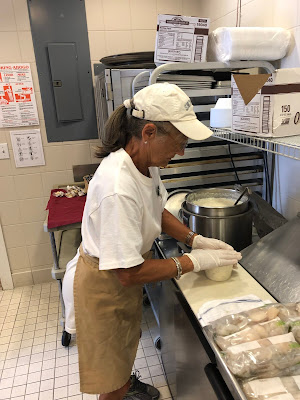 Once fries and seafood are done, they are emptied into stainless pans (on the left in the picture below) and the guy in blue "plates" the food. The gal next to him places paper plates out for him, puts on a small cup of coleslaw and a lemon. Do you see the mountain of stacked paper plates behind her? Usually 275-300 plates are served at each lunch! 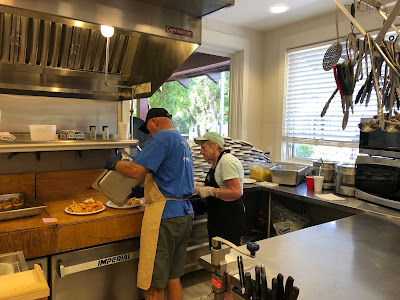 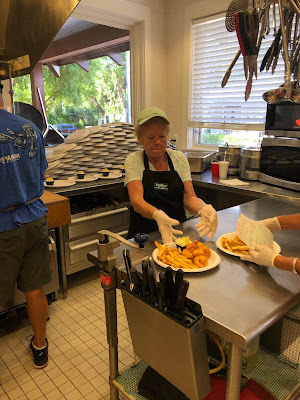 Food for each ticket is plated, and handed off to be placed on a server's tray.
The bus"boys" scramble for each French fry that drops on the tray!
We don't get fed until everyone is served, and the smell of all of that food is almost maddening! 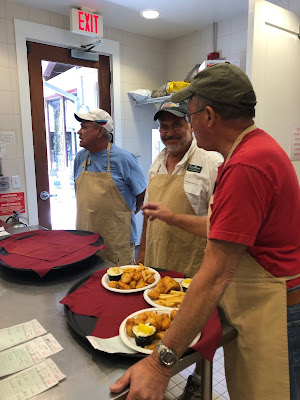 The food is then whisked out the door to the appropriate table. 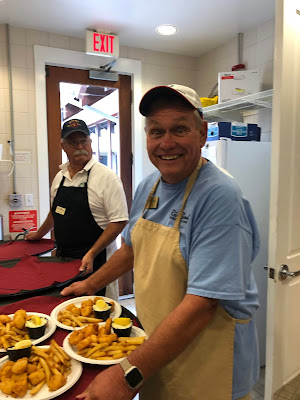 I had such a great time working the seafood lunches this season. The guests from the resort love the food. Each year we hope that "chef" and his wife are willing to cook lunches for the resort again!